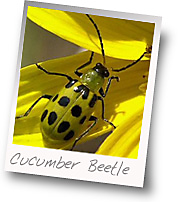 Cucumber beetles are found throughout the United States and southern parts of Canada.

So... What's a Cucumber Beetle?

Both beetles have black heads. The larvae of both beetles are between 1/3" to 3/4" in length and white to yellowish-white in color. The eggs are yellowish-orange in color. Despite these slight differences in appearance, both of these cucumber beetles are similar in their life cycles, the damage they do, and the methods used to control them. When the adult cucumber beetle emerges from overwintering, after finding food, it will lay eggs in the dirt next to plantings, which can then be used by the larvae for nourishment once they hatch in about ten days.

Larvae will feed on the roots and stems of the plantings for 2-4 weeks and then pupate. In another two weeks, they will emerge as adults. Depending on the climate, there can be 2-3 generations of cucumber beetles in a year.

Cucumber beetles are found throughout the United States and southern parts of Canada.

The adult cucumber beetle overwinters under vegetation debris or thick grasses. In areas where winters are quite cold, the cucumber beetle migrates southward to warmer regions. They return to their northern habitats during the spring of each year.

They search for food in nearby fields, eating wood pollen and stems while waiting for the emergence of their favorite crops such as cucumber, bean, and various squash and melon seedlings.

The spotted cucumber beetle will also feast on corn, peas, potatoes, tomatoes, and peanuts among other vegetation.

Plantings may become stunted in their growth and may collapse or fall over due to insufficient strength because adult beetles feed on the plant stems. Roots and young shoots may appear to have been chewed since they are favorites of the cucumber beetle larvae. Diseases may appear in the fruit later in the season, transported to the plant by the adult cucumber beetle.

Crop yields may be limited, and fruit may be inedible or unmarketable. Plantings and even entire crops may eventually die from the infestation of this destructive beetle.

Controls can be a good method for eradicating these pests. There are products on the market containing insecticidal soaps and pyrethrins that can be used safely, following the directions on the product. Tomato & Vegetable Insect Killer is the ideal insecticidal soap and pyrethrin combination.

In addition, Azadirachtin is an insect growth regulator which is derived from the neem seed. It is a good method of controlling the cucumber beetle. Safer® Brand BioNEEM® uses Azadirachtin to eliminate insects in your garden.

Pyrethrin is a nerve agent and will paralyze and kill the insect on contact. Keep in mind this soap is not like dish detergent, it's a base from a blend of plant sources and pyrethrin oils and comes from the chrysanthemum flower.

Azadirachtin interferes with molting and insects will die. It kills the larval or grub stage of the insect. This product repels aphids, Japanese Beetles, Sod webworms and Cinch bugs as well as other adult insects. It is ideal for use on fruits, flowers, vegetables and ornamentals. Use in accordance with directions on the product label.

Spray Tomato & Vegetable Insect Killer as a contact killer. Use in accordance with directions on the product label.

Apply BioNEEM® at the first sign of larval activity (damaged plant roots or stems.) You may need to re-apply Azadirachtin after every 7 days or so to affect newly hatched cucumber beetle grubs.

Parasitic nematodes (non-segmented round worms) appear to be the only naturally occurring control of cucumber beetles. This control method is especially desirable since the nematodes will not harm people, pets, wildlife or the environment.

Nematodes appear to control cucumber beetle larvae. Nematodes should be applied directly to the soil.

Nematodes may need to be applied on a weekly basis. Read and follow all accompanying instructions when applying nematodes.