Fungus gnats are root-eating pests that thrive in moist soil, and are often a problem for houseplants. These insects have a very short lifespan, during which they may carry plant diseases from one host plant to another, creating big problems for home gardeners.
More Learning Resources
Going Organic » Gardening » Lawn Care » Insect Library » Plant Disease Library »Pest Animal Library » Articles »E-Books » Quizzes »

So... What are Fungus Gnats? 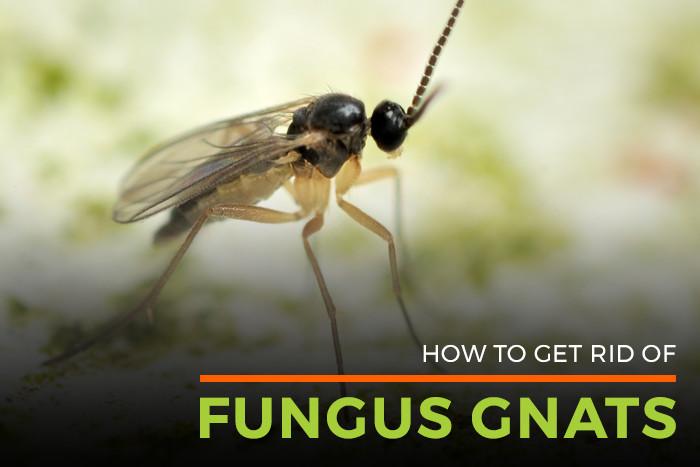 Adult fungus gnats are tiny, measuring no more than 1/8 inch in length. They have medium gray to black bodies with clear or light grayish wings. They are easily confused with drain flies and even mosquitoes. They are also called mushroom flies or manure flies.

Fungus gnat larvae have whitish or semi-translucent bodies, black heads and reach about 1/4" maximum length. Eggs are somewhat round in shape and are either clear or light in color, making them difficult to see. Though they have wings, fungus gnats struggle to fly well, and you can often see adults walking along a plant rather than flying from leaf to leaf.

Fungus gnats can be annoying to gardeners, homeowners with indoor plants, and greenhouse operators. Larvae are considered the most dangerous life stage to gardeners, because they cause root damage and are linked to the spread of fungal problems.

Depending on the temperature, the eggs hatch in about 5 days, the larvae will emerge and begin eating to gather energy to fuel their transformation into adulthood. At the end of two weeks of feeding, the larvae will pupate for 5 days or so before emerging as an adult that is ready to mate and lay another generation of eggs. 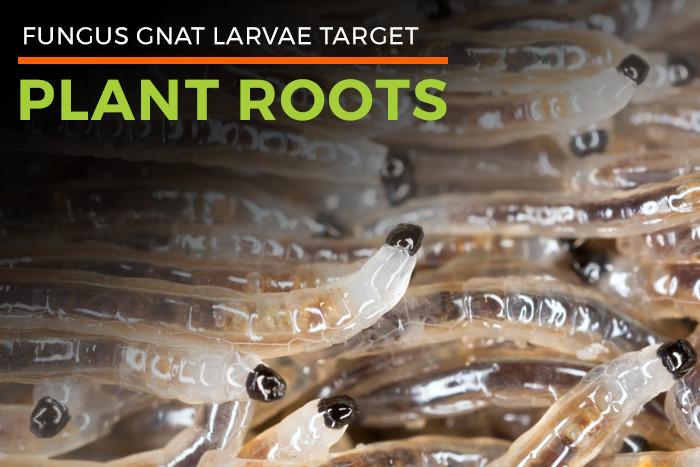 While fungus gnats can attack any plant, these plants are most susceptible to these insects:

The most obvious symptoms of a fungus gnat infestation is seeing adult fungus gnats lingering on your plant or flying around a plant in a swarm. They also are attracted to light, so they may congregate on windows or lamps.

Your plants will also indirectly show you the symptoms of infestation. Plants struggling with an infestation of fungus gnats will exhibit poor growth, wilting, yellowed leaves and falling leaves.

Potted plants, in particular, will show signs of an infestation when they lose their vigor and the leaves turn yellow without any clear signs of injury to plant above the soil line. Inspecting the roots will show that the root hairs have been eaten off. The larvae will be evident if you look just below the surface of the growing medium.

Results of a Fungus Gnat Infestation

The larvae can cause serious injury to a plant's roots, interfering with the plant's growth or causing the death of the plant. 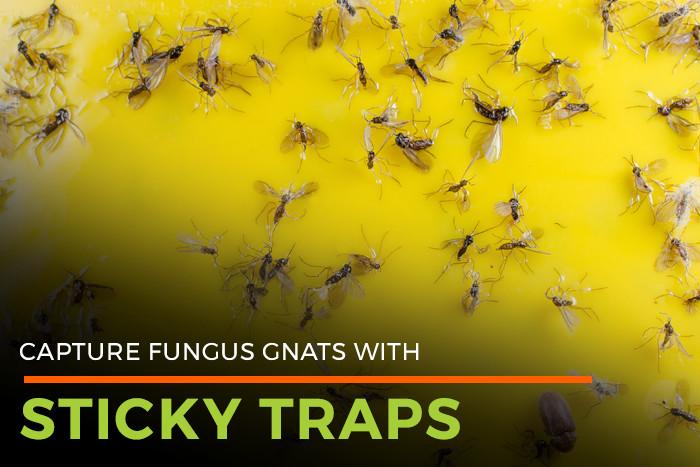 Safer® Brand Yard & Garden Insect Killer can help control an infestation of fungus gnats if they are spotted on your plants.

Insecticidal Soap (Potassium Salts of Fatty Acids) & Pyrethrin products, such as Safer® Brand Yard & Garden Insect Killer, are the equivalent of a one-two knockdown punch in the battle against these insects. Without using insect-killing soap, fungus gnats are tough bugs to kill.

The insecticidal soap's power against fungus gnats comes from its ability to penetrate their exoskeleton. This weakens and dehydrates the fungus gnat while allowing the spray's pyrethrin to enter the insect's system.

Once inside the insect, pyrethrin acts as a contact nerve agent that paralyzes and then kills the insect.

Keep in mind that insecticidal soap is not simple dish detergent, it's comprised from a blend of plant sources. Meanwhile, the pyrethrin oils are derived from the chrysanthemum flower.

Safer® Brand has another option for gardeners fighting against fungus gnats – Sticky Stakes. These insect traps use a bright yellow color to attract and then trap fungus gnats. Use Safer® Brand Sticky Stakes in indoor houseplants. Place them directly above the plant or insert them into the soil at the base of the plant. The gnats will investigate the yellow color and get stuck on the pad. Once it fills up, throw the sticky pad away and add another until catches cease.

Spray Safer® Brand Yard & Garden Insect Killer is a contact killer. Use in accordance with directions on the product label.

Place the Safer® Brand Sticky Stakes as soon as you see the first signs of fungus gnats. 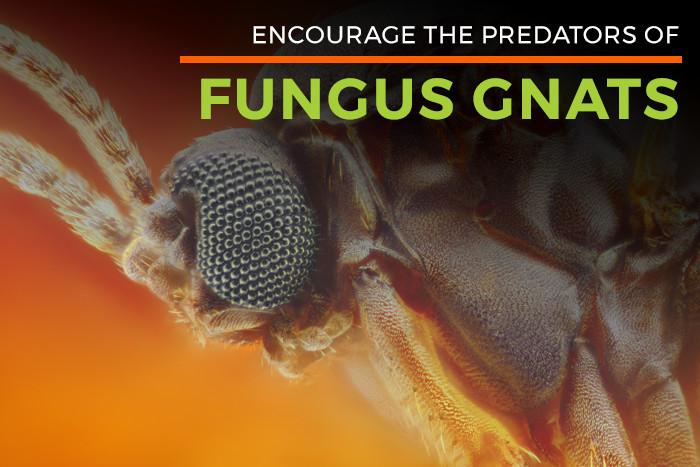 Fungus gnats have a predator that actually is named for the tiny pest. Fungus Gnat Predators (Hypoaspis aculeifer) look particularly for fungus gnats as well as other garden pests.

Fungus Gnat Predators (Hypoaspis aculeifer) pierce the larvae and feed on their insides. Both adult and nymph fungus gnat predators, which are a species of mite, will prey on the fungus gnats causing damage to your plant. These beneficial predators are usually sold commercially in shaker containers and can be spread over the soil. After applied, they will burrow into the soil where they will seek out fungus gnats and reproduce.

Use caution when introducing predators in conjunction with insecticides. Spray an organic insecticide first. Then introduce the predatory species to kill the rest of the infestation. If applied in the opposite order, the insecticides may also kill these beneficial predators.

If using commercially produced fungus gnat predators, be sure to read and follow all instructions that accompany them to find out when to disperse the mites on the plants. They should be applied before fungus gnat populations become established or when populations are low.