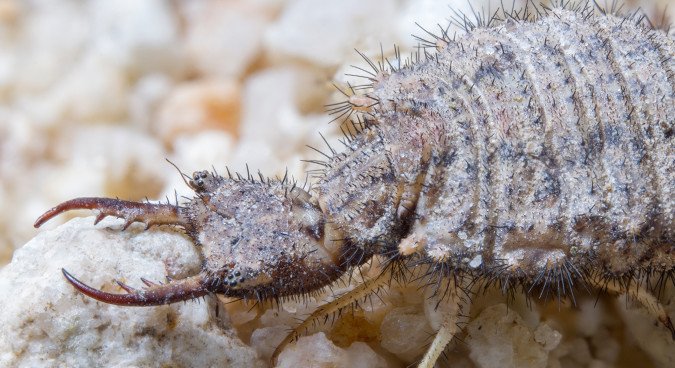 FAMOUS RELATIVES: Owlflies (Bug-eyed insects with iridescent wings that look a lot like dragonflies) and Blue Eyes Lacewing (An Australian bug with amazing baby-blues) – both of these insects have larvae that hunt in a manner similar to antlions. SIZE: Antlion vary widely in size according to their species. Most antlion larvae in North America are a little more than a half an inch long. Those same antlions are about 1.5 inches long as adults. HOW YOU MIGHT COME ACROSS IT: During a visit to the beach or other sandy area HOW TO IDENTIFY IT: Look for cone-shaped depressions in areas of loose sand or soil WHAT IT EATS: Any insect or spider that falls into its trap WHAT EATS IT: Crickets, birds and other insectivores

WHAT YOU NEED TO KNOW: When it comes to capturing prey, insects and spiders have some pretty sinister ways to get a meal. It’s never surprising to hear about insects that poison, infest, decapitate, ambush, paralyze or liquify their prey on that endless quest for something good to eat.

For antlions, catching a meal literally goes to a whole new level. These insects set a trap unlike any other in the Animal Kingdom. To begin, the hungry antlion finds a nice sandy area, often along beaches and sand dunes. To build its trap, it starts by digging a strange, spiraling line in the sand. As the spiral gets grows, it pushes sand to the outside of the spiral, ultimately making a cone-shaped depression in the sand. When the cone is deep enough, the antlion buries itself at the bottom of the hole and waits. 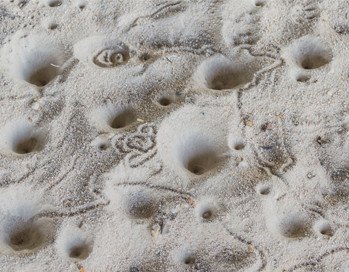 Eventually an ant, spider or other small invertebrate comes walking along and quickly discovers the antlion has a few surprises in store!

First, the insect finds that going into the hole is a lot easier than getting out. Thanks to the unique way the pit was constructed, the sides are incredibly steep and, even with six or eight legs, it’s hard to climb out. This is because the walls of the cone are built to be highly unstable – every time a bug tries to get a foothold, it tears away a bit of the sandy wall and slides back to the bottom. 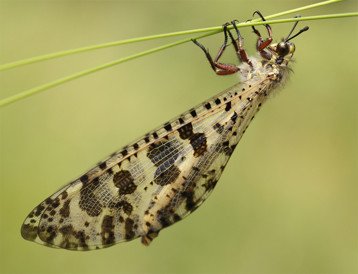 While its victim is struggling to escape the collapsing walls of the pit, the antlion is doing its best to make the getaway even more difficult. It flicks sand to the top of the pit which triggers a mini-avalanche. Whenever the fleeing insect comes close to reaching the top, the antlion’s avalanche sends it back to the bottom.

Ultimately, the antlion’s target tumbles down to the very center of the trap where the clever predator is waiting. At that point, it’s all over – the antlion snaps its massive mandibles around its prey and sucks out the insides.

What’s more, these trap-setting murderers aren’t even full-grown adults – they get their killing done while still young. That’s right, the antlion that creates the avalanche of doom for innumerable other bugs is just a baby. After a few months (sometimes years) in larval form, these creatures shed their giant mandibles, sprout wings and become graceful flies. Their transformation into adults is also a bit of a moral change for them, too – they go from hyper-aggressive ambush predators to a dainty fly that eats nectar and pollen. Talk about a real change from their childhood ways.