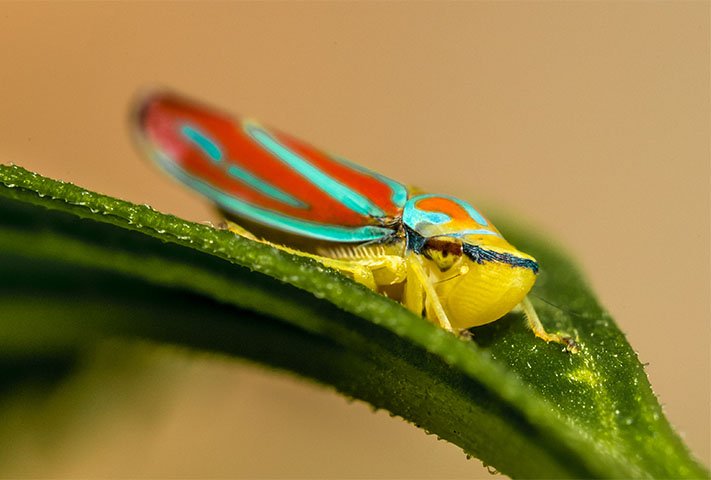 FAMOUS RELATIVES: Zyzzogetons, a rare branch on the leafhopper family tree that’s most known for being the last entry in Webster’s New International Dictionary. Dziwneono, more cousins to the candy striped leafhopper whose name means “a strange one” in Polish. SIZE: About 1/3 of an inch HOW YOU MIGHT COME ACROSS IT: You may spot them on blueberry or rose bushes, but you won’t see them long before they jump away. HOW TO IDENTIFY IT: Look for the vivid striping of blue and red on this North American leafhopper. WHAT IT EATS: The Candy Striped Leafhopper feeds on plant sap, which it drains from the plant with the help of specialized mouthparts. WHAT EATS IT: Spiders, lacewings, parasitic wasps, ladybugs and many others.

WHAT YOU NEED TO KNOW: The Candy Striped Leafhopper may well be the best-dressed bug on the planet. As a contestant for this glorious honor, this leafhopper is decked out in red and luminous blue stripes that really make it stand out from the rest. 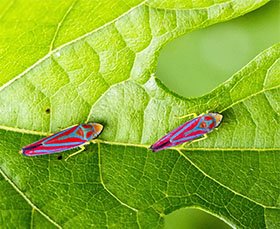 In fact, rather than rely on camouflage as most insects do, this bug has another defense that protects it from predators. It’s a trait that lets it live up to the other part of its name – leafhopper. When trouble comes near, the Candy Striped Leafhopper will launch itself into the air in a powerful leap. This split-second jump is often enough to escape any danger that approaches, including people.

Beyond its striking colors and super-jump, the Candy Striped Leafhopper has another amazing (and kinda gross) feature – this insect is also a miniature squirt gun. Thanks to this ability, a leafhopper is sometimes nicknamed a “sharpshooter bug,” and its built-in squirt gun fires a spray of droplets several body lengths away. 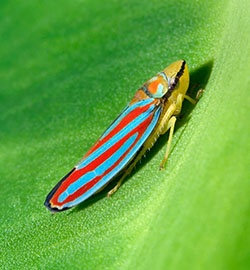 What’s your favorite attribute of this impressive insect? Its super-jump? Their amazing colors? Or its fully-loaded butt cannon?

DOWNLOAD THIS ARTICLE AS A CANDY STRIPED LEAFHOPPER POSTER