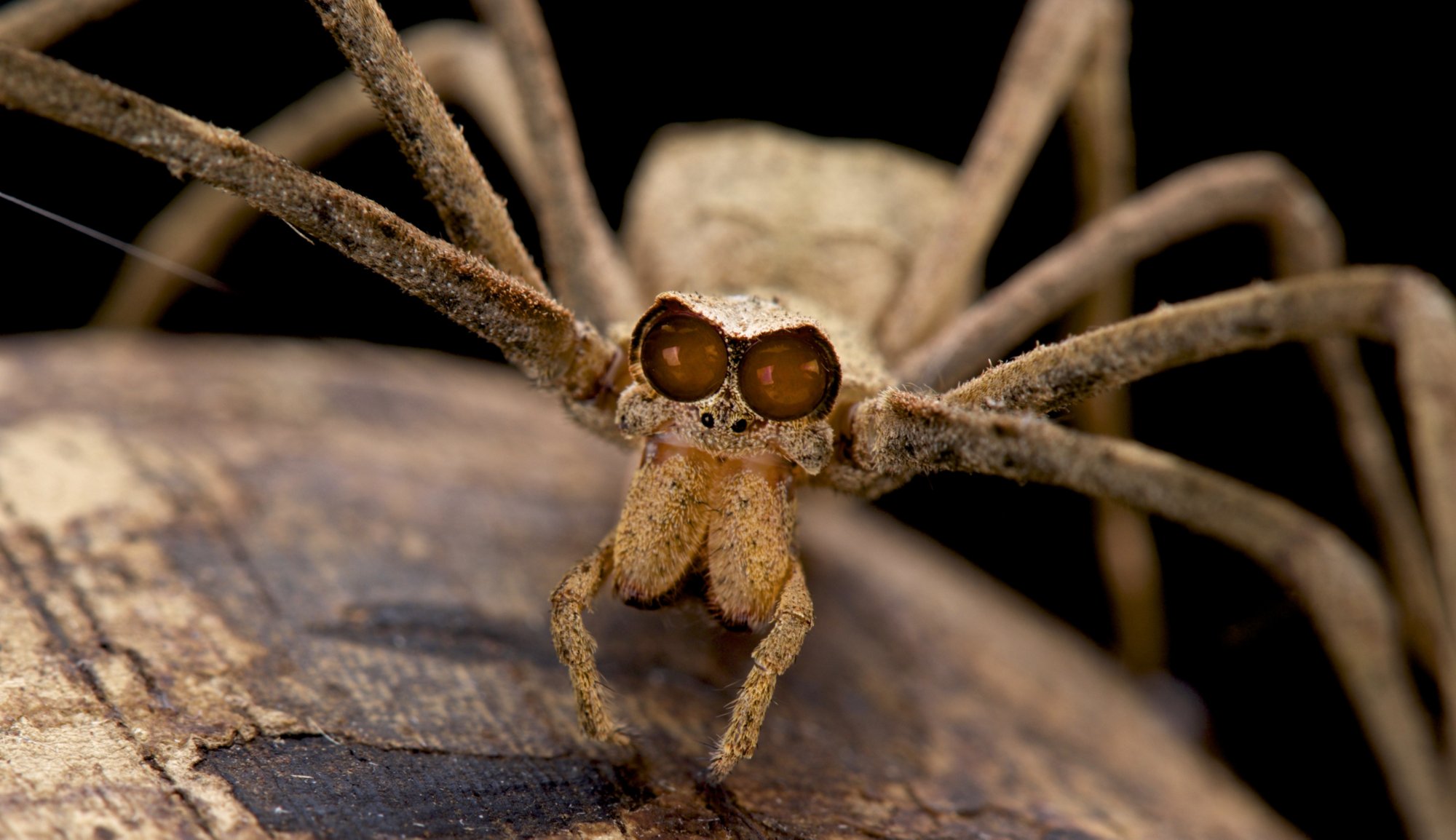 FAMOUS RELATIVES: Dinopsis spinosus (The only ogre-faced spider in the U.S.) and Dinopsis longipes (A tiny net-casting ogre-faced spider species found in Mexico). SIZE: Their bodies are a little over 1 inch long. With legs stretched out, they can be more than 3 inches long. HOW YOU MIGHT COME ACROSS IT: This interesting spider can be found in yards in Australia. HOW TO IDENTIFY IT: Look for a spider that’s holding a web between its forelimbs while hanging upside down. WHAT IT EATS: Any insect or spider that travels near its web. WHAT EATS IT: Any insectivore that’s able to catch it.

WHAT YOU NEED TO KNOW: Across the Southern Hemisphere, there are dozens of ogre-faced spider species. These spiders earn their name for having a face only a mother could love – large black eyes and a permanently angry look. 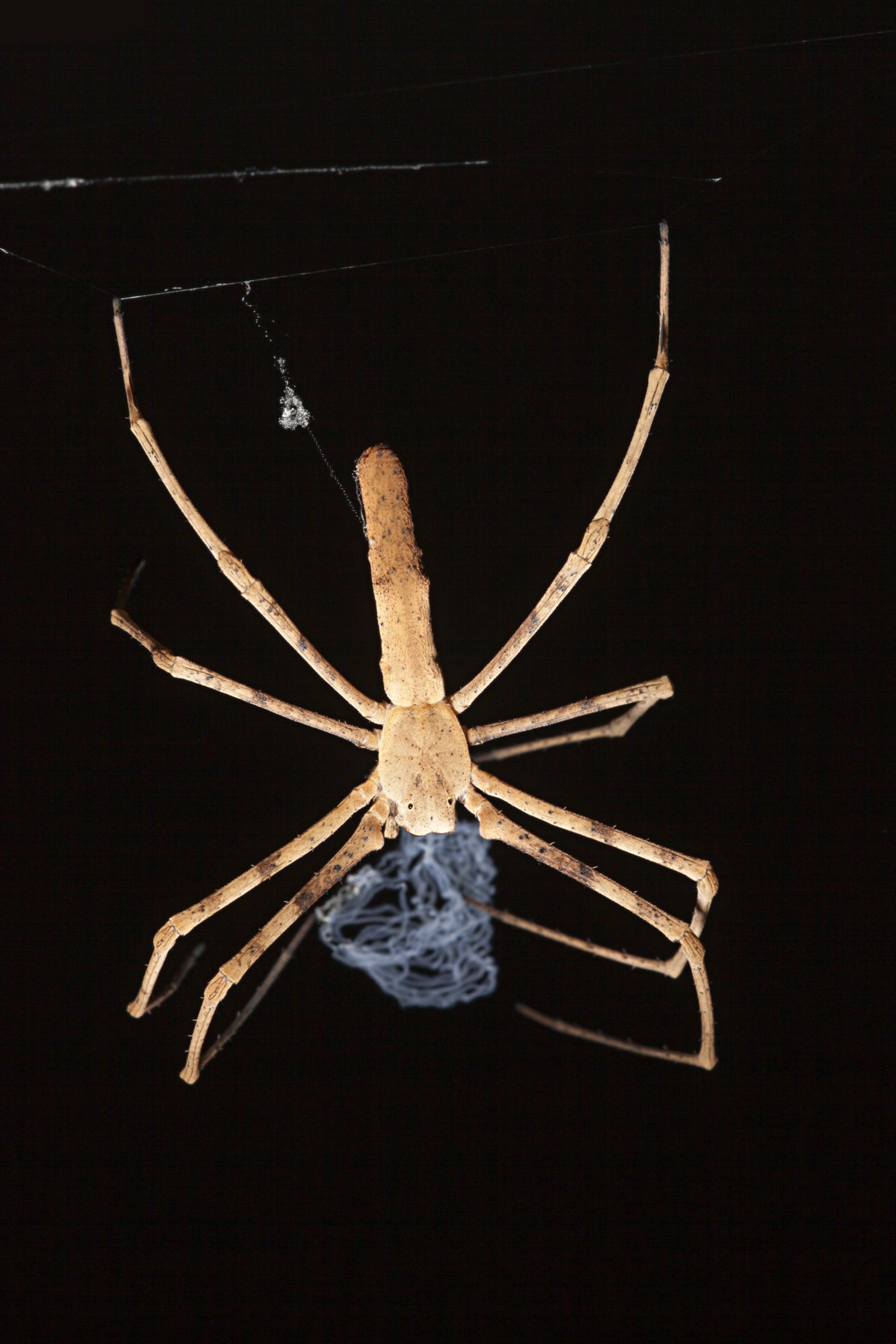 Even beyond their creepy name, these long-legged spiders are most well-known for their unique trapping method–they catch their prey by throwing a web on them.

In Australia, the Common Net-Casting Spider (Deinopis ravidus) is an ogre-faced spider found in lawns, gardens and the continent’s bushland areas. Scientists have carefully observed the Common Net-Caster to see how it performs these catches. It turns out they use a homemade targeting system that would do the Army Rangers proud with their “Death From Above” tactics.

With those in place, the spider then weaves another net on its front forelimbs. This stretchy net isn’t sticky, but contains threads that will entangle its victims. The net construction is loosely “web” shaped, but, at this stage, it looks more like the spider is holding a plastic grocery bag. 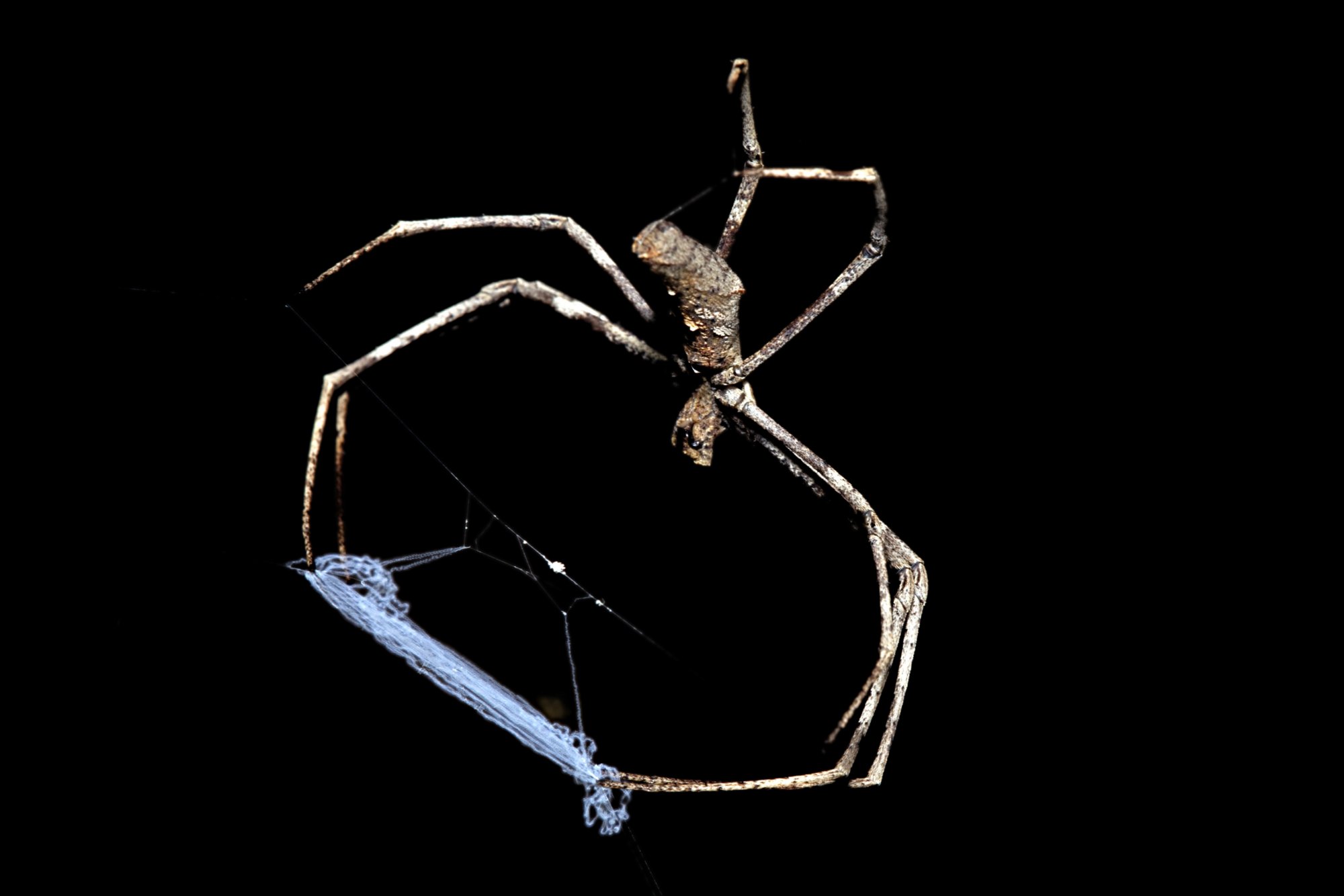 After completing that construction, the Common Net-Caster retreats up its safety line where it waits for prey to pass underneath. Though these spiders have great night vision, they have also learned to set up an amazing targeting system that appears to help them sense prey.

Scientists believe the targeting system works like this: First, they build their trap above a flat, uniformly colored surface, such as a leaf. As they begin construction, they put a few dabs of a white substance leaf below them. The spider uses those white dots to help it aim – when a bug blocks out the target-dots, the spider knows to launch its attack. Not before, not after, but only when the bug crosses the dots!

As the ogre-faced spider drops on its prey, it quickly stretches the net taut – an action that makes the net now look vastly more weblike. As a result, the web is finally ready for business! While plummeting toward the target spots, the spider throws the web over the bug and in a lightning-quick action, snaps it closed, trapping its prey. From there, the spider does what every other spider does – it injects it with venom and wraps up its midnight snack.

Ogre-faced spiders all around the globe trap their prey the same way – using a catch-net to ambush their meals.