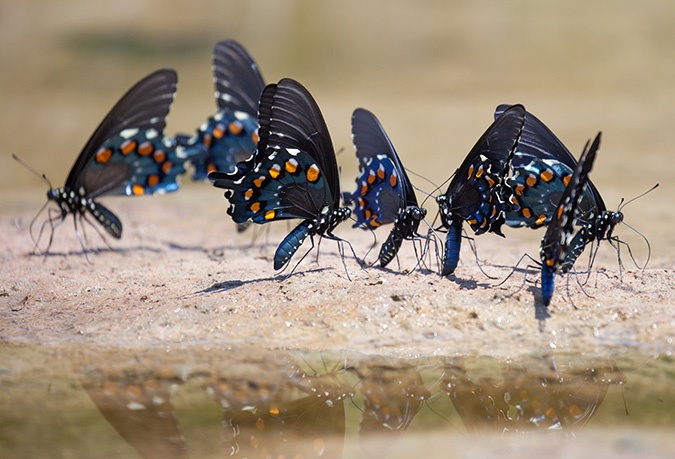 FAMOUS RELATIVES: While the Pipevine has plenty of relatives, it also has lookalikes! Among those dopplegangers are the Easter Tiger Swallowtail, the Black Swallowtail and the Spicebush Swallowtail. SIZE: Butterflies have a wingspan of 3½ inches. Caterpillars grow to be two inches or so. HOW YOU MIGHT COME ACROSS IT: In your backyard, happily visiting your pipevine plants (if you have any). HOW TO IDENTIFY IT: These butterflies are most well-known for their gorgeous blue wings with an iridescent sheen to them. Caterpillars are black with orange-colored spines that run down their body. WHAT IT EATS: Caterpillars eat – you guessed it! – pipevine plants. As butterflies, adults drink nectar from flowers. WHAT EATS IT: Not many creatures are willing to try a Pipevine Swallowtail snack. One bold creature is the green anole, a lizard you may have seen in pet stores.

WHAT YOU NEED TO KNOW: Gracing the yards and meadows of much of North America is the Pipevine Swallowtail butterfly – a glorious insect with broad blue wings that shimmer with iridescence as it flits from plant to plant sipping flower nectar. 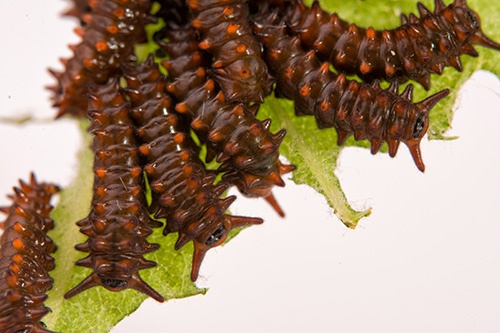 It makes for a lovely scene, doesn’t it?

The Pipevine Swallowtail’s nefarious plot begins after it hatches out of its egg. Yes, even as a baby the Pipevine Swallowtail is out to get you. How so? Because right away the young caterpillar starts eating the poisonous plant Aristolochia, which is sometimes called pipevine, Dutchman’s pipe and birthwort. 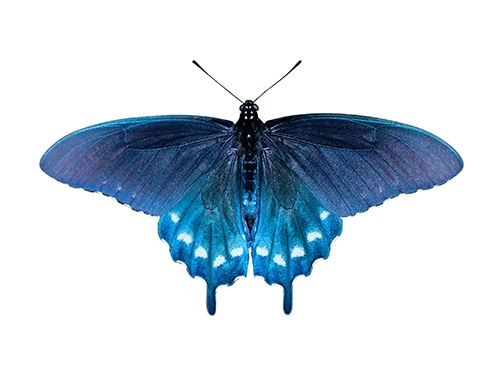 As it matures and eats more and more Aristolochia, the caterpillar retains much of the toxin inside its body without succumbing to the poison itself. Over time, the caterpillar and its butterfly adult form have so much toxin in it that the insects become toxic as well.

As a result, birds, insects and other animals who try to eat a Pipevine Swallowtail caterpillar are in for a surprise! These tough caterpillars will exude a foul tasting liquid when they’re in trouble, which causes most animals to spit them out right away. For those animals who manage to swallow one, they are subjected to the poisonous acids that Pipevine Swallowtails store inside in their body. Even as adults, the toxin remains and predators soon learn to leave these beauties alone.

In all, it’s a pretty clever plan on the Pipevine Swallowtail’s part. They poison themselves as a form of protection! While some predators learn this the hard way, others appear to have an instinctual aversion to their color and wing patterns.

In fact, their poison works so well that Pipevine Swallowtails aren’t worried about predators at all. Caterpillars make no effort to hide themselves while chomping down on the Aristolochia, and butterflies appear to be equally carefree. Likewise, a number of other butterflies have adopted the look of the Pipevine Swallowtail in their own effort to ward off predators.

It certainly makes sense. What predator would want to knowingly eat something that’s foul tasting and makes them sick? You have to give credit to the Pipevine Swallowtails and their clever little scheme – it’s a great way to avoid the hungry animals of the world!

DOWNLOAD THIS ARTICLE AS AN PIPEVINE SWALLOWTAIL POSTER
Help & Advice