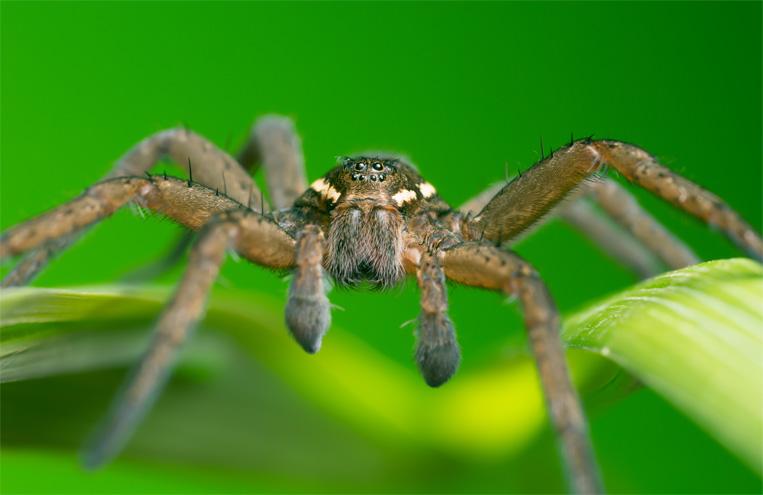 Size: Females' bodies are almost an inch long. Their legs can stretch nearly 3 inches across. Males are much smaller.

How You Might Come Across it: These agile spiders skate across placid bodies of water and are found across Europe.

How to Identify it: Large, semi-aquatic spiders with a broad white stripe on the side of their dark brown-colored bodies.

What it Eats: Water-living insects and larvae

What Eats it: Birds, frogs and other insectivores. Also, females will eat males.

What You Need to Know: The ability to walk on water has earned this European spider the nickname of 'Jesus Spider,' but that's just one of the amazing things about these speedy arachnids. 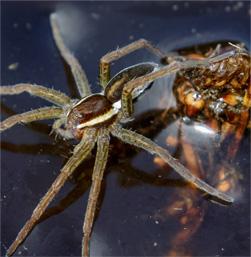 How do they walk on water? The spiders have evolved special water-repelling hairs, which, along with their light body weight, keep them from breaking the surface tension of pond water. These adaptations allow them to race across the surface as if they were skating on ice. When hunting, a raft spider perches itself on a stalk of vegetation and waits for a bug to land on the surface of the water. The spider then zips across the surface and strikes. Some raft spiders have even been known to attack small fish and tadpoles, scooping them right out of the water.

When threatened by a predator, these spiders escape under the water by climbing down a plant stem. They can stay underwater for a whopping 10 minutes - more than enough time for a hungry bird to lose its interest. 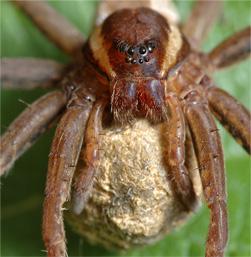 Beyond their physics-friendly hunting method and scuba adventures, these chocolate-colored spiders also turn out to be great mothers. (Not-so-great dads, though, since the mom is more than happy to eat him after mating.) When she first lays her hundreds of eggs, she will carry them around in a sack hidden under her abdomen. As the eggs get closer to hatching, she will spin a protective 'nursery web' sac for them to live in for a few weeks after they hatch. For about a week, momma raft spider shows her protective nature by standing guard outside the nursery web. Her young aren't very friendly though - they sometimes resort to cannibalism before leaving to find their own territory.

What's scary is that raft spider's nursery webs can hold hundreds of baby spiders. Not something you want to stumble through on a hike!