What Does the Non-GMO Label Mean?

A new label, “Non-GMO Project,” is appearing on food packaging in your grocery stores. With the label, shoppers get a tool to help navigate the often-confusing grocery aisles since it provides a clear way to identify products that do not use GMOs.

But how does it compare to the USDA's Organic label? Here's a quick snapshot of the differences, which we'll get into later: 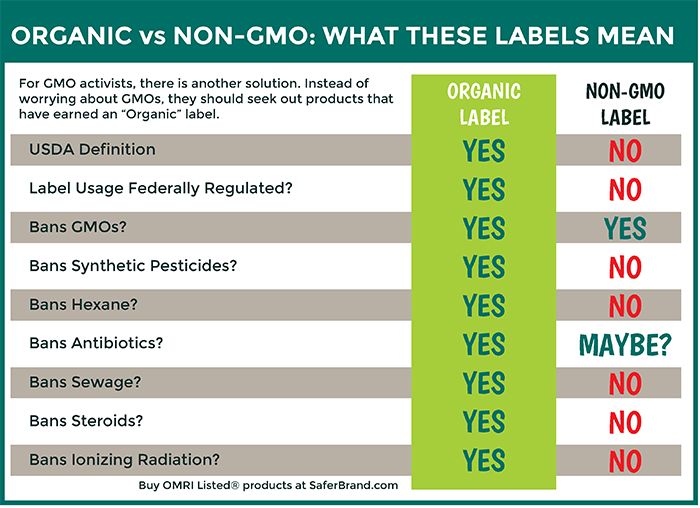 GMOs, which stands for Genetically Modified Organisms, are plants, animals, microorganisms and other ingredients that have been manipulated by scientists to assist in their production, preparation or use as a food. Scientists achieve these results by manipulating or modifying genes in ways not previously possible in nature or through crossbreeding.

For many people, GMOs present dietary risks they are unwilling to take. This concern stems from the fact that so few studies have been conducted on their risks to human health and how GMOs affect the environment. Further, they say the unscrupulous biotechnology companies that develop GMOs patent these creations and restrict their use. This gives these companies the opportunity to sue farmers whose fields may inadvertently grow these crops. Inadvertent use may happen if bees cross-pollinate a crop, or if the wind or erosion carries seed into a new field.

Scientists and companies counter these arguments by explaining they are creating products that offer higher yields, are easier to manage and use less space and resources. These benefits, they say, far outweigh the feel-good issues brought up by anti-GMO activists. At the same time, they freely admit they act in their own best interests to protect their investments and property from theft and used without their permission. 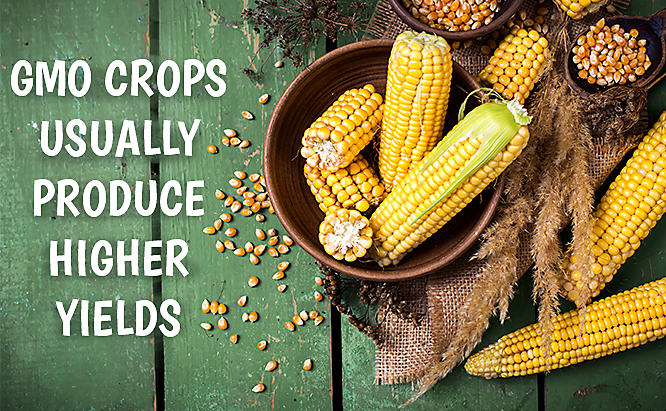 WHAT ARE SOME COMMON GMO PRODUCTS?

The Non-GMO Project lists several common plants that are often GMOs, especially when produced on an industrial level. Common plant examples are:

Animal products (and the animals themselves) can often be GMOs. Examples include:

Whether or not GMOs are safe depends on whom you ask.

Non-GMO diet practitioners say no, because humans are meant to consume natural substances, not Frankenstein creations that we can’t process properly. This manipulation, they fear, could lead to increased instances of cancer or other ailments. Further, these creations may prove to be too difficult to control if they start growing in the wild, which threatens native species.

Scientists, however, point to data assembled from the numerous studies they’ve made. One recent article from Cornell University’s Alliance for Science pulled the consensus all together, stating “everyone previously fearful about the health effects of GMOs (should) breathe a huge sigh of relief and start looking for more evidence-based explanations for worrying trends in health issues.”

Both sides feel the debate is settled. Scientists say go full-steam ahead and continue creating GMOs that grow better, produce more and deliver the nutrients we need most. Anti-GMO factions say shoppers deserve warnings about what they eat and that most GMOs aren’t worth the risk. 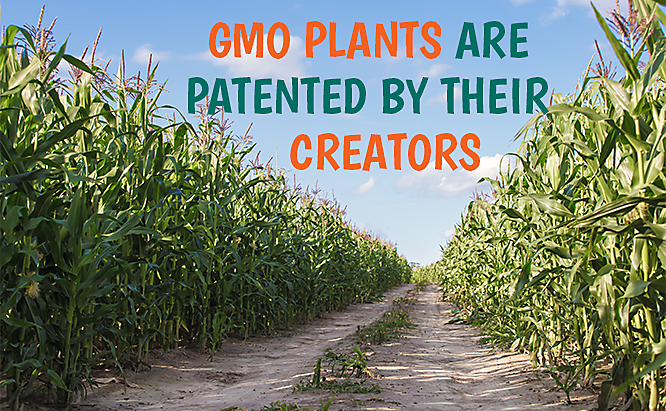 HOW DO ORGANIC PRODUCERS AVOID GMOs?

Considering the ubiquitous use of GMOs in industrial agriculture, completely avoiding these products is becoming more difficult. In fact, many producers who want to retain a GMO-free status are finding it harder to do so because of accidental exposure to neighboring fields that do raise GMO crops.

Recognizing this, the USDA explains that producers’ intentions are what count – the inadvertent presence of GMOs in otherwise GMO-free crops can still earn that product organic certification. Further, the agency urges the use of planting methods that discourage accidentally mixing the two. These methods include rotating planting times, agreements with neighbors to avoid GMO use and the thorough cleaning of farm equipment used in processing both crop types.

For GMO activists, there is another solution. Instead of only worrying about GMOs, they should simply seek out products that have earned an “Organic” label. For more information on each element, see the description below. 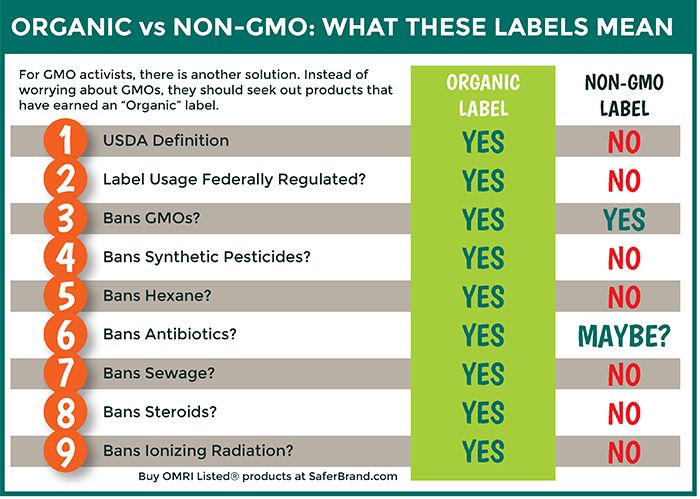 USDA DEFINITION – In order for the USDA to develop a policy for regulating a particular label, the agency requires an enforceable definition for that label. The USDA has definitions it applies to products labeled organic, which includes fruits, vegetables, meat and other products. The USDA simply defines GMO as “An organism produced through genetic engineering,” which is vague enough to include common practices as cross breeding and selective breeding. It does not have a definition of what a “Non-GMO” product is, and, as a result, it cannot take actions to enforce this term.

LABEL USAGE FEDERALLY REGULATED? – Products that are labeled organic are certified by the USDA’s National Organic Program. There is no federal agency to enforce Non-GMO labels. There is the Non-GMO Project, which is an independent organization that awards its labels to those that meet its standards.

BANS GMOs? – Both the USDA’s organic-certified products and those carrying the Non-GMO Project label do not permit GMOs to be in any part of the product.

BANS SYNTHETIC PESTICIDES? – USDA standards require that only natural pest controls, such as predatory insects or OMRI Listed® insecticides, be used on organic products. Non-GMO labeled products have no standard since it is entirely focused on the origins of the product, not the growing conditions it faces.

BANS HEXANE? – Hexane is used in industrial farming to maximize the extraction of plant oils. It is not permitted for use on organic-certified products because its residue can persist in the environment. Rules for Non-GMO standards do not mention hexane usage.

BANS ANTIBIOTICS? – Livestock producers often use antibiotics to grow larger animals. Their use is not permitted under organic rules. Non-GMO Project standards probably do not allow for antibiotics, but their standards aren’t entirely clear on this.

BANS SEWAGE SLUDGE? – Sewage sludge is used as a high-nutrient fertilizer in industrial farm operations. This sludge can include waste products from humans and animals. Organic standards forbid its use, while Non-GMO standards have no stance at all.

BANS STEROIDS? – Organic meat producers cannot have used steroids to promote growth in livestock. The Non-GMO movement focuses on how livestock is created, not how it develops after birth.

BANS IONIZING RADIATION? – Ionizing radiation is used to extend food shelf-life while also killing micro-organisms and pests. This process is not permitted under organic standards. As mentioned above, the Non-GMO movement tries to prevent manipulation of a product before it begins growth, rather than processes applied during its development.

Overall, there is nothing inherently wrong with the Non-GMO movement. It is well-intentioned and advocates for the consumer. However, its exclusive focus on a product’s origins actually makes it less-inclusive than those labeled as “USDA Organic.” The USDA label has a broader application, is legally binding and fully enforceable by the federal government. The result? When compared to the Non-GMO label, USDA Organic labeling better serves consumers. 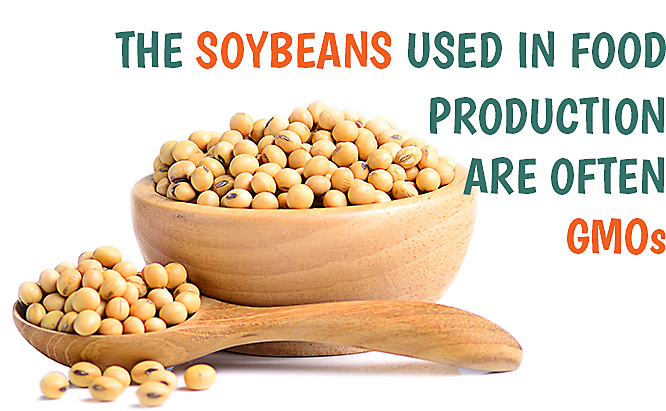 Looking for more in-depth articles like this one? Subscribe to the Safer® Brand E-Newsletter for more information on organic gardening as well as links to our OMRI Listed® products. You can also join in the conversation about gardening when you visit the Safer® Brand community on Facebook.