While asparagus beetles can be difficult to eliminate, using a product such as Safer® Brand Tomato and Vegetable Insect Killer rids your garden of them quickly.

So... What are Asparagus Beetles?

With a blue-black body of approximately 1/4" in length, the Common Asparagus Beetle has a colorful appearance. Green tipped antennae, a reddish thorax, and three yellow patches or spots on both sides of its wings are additional unique features.

The Spotted Asparagus Beetle is a little larger and has an orange-red body with six black spots on each of its wings. It has black eyes and black antennae.

After emerging from "overwintering," the beetles begin to eat the young shoots and tips of the asparagus plant. This usually occurs somewhere around early to mid-April, depending on the region's climate. Once they have nourished their bodies, they will begin the process of laying eggs.

The adults then emerge from these chambers and then the life cycle process starts all over again, with the new adults feeding on the asparagus plants and shortly thereafter, laying their eggs. There can be anywhere from 2-5 generations in one year, depending on regional climates and temperatures.

There are a few differences between the reproduction cycle of the two species.

Both species are found throughout North America, but the spotted asparagus beetle inhabits only areas east of the Mississippi River. During the winter, these beetles live under old plants and similar debris that provide shelter from the cold.

Using an insecticidal soap and pyrethrin mix, such as Safer® Brand Tomato and Vegetable Insect Killer, will keep your garden free from these destructive insects.

Since they eat the shoots of the young, green asparagus plants and also chomp on the leaves, you will likely find holes in the leaves and plant structure.

The damage to the plant tissue will cause the tissue to take on a brownish color. Tips of the buds on the plants may turn brown as well. In addition, the plant will not look healthy, appearing almost shrunken and shriveled when it has been devastated by the beetles. 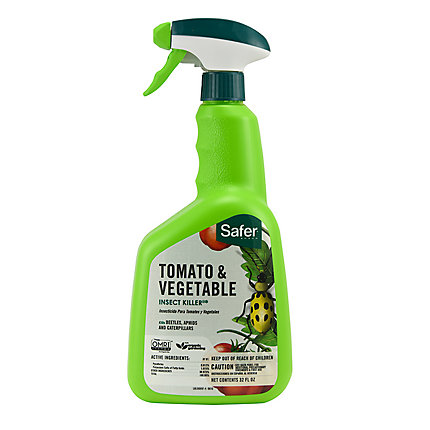 Pesticides that are compliant for use in organic production, can be a good method for eradicating these pests. Products like Safer® Brand Tomato and Vegetable Insect Killer utilize insecticidal soap and pyrethrin to cause paralysis in asparagus beetles and result in their death.

Insecticidal Soap and Pyrethrin - combined are the equivalent of a 1-2 knock down punch. The soap will penetrate their shell enough to weaken and dehydrate the insect and allow the pyrethrin to absorb in to the insect and do its job. Safer® Brand Tomato and Vegetable Insect Killer harnesses the power of insecticidal soap and pyrethrin to eliminate asparagus beetles from your garden.

Pyrethrin is a nerve agent and will paralyze and kill the insect on contact. Keep in mind this soap is not like dish detergent, it's a base from a blend of natural plant sources and pyrethrin oils and come from the chrysanthemum flower--an beneficial combination.

Spray Safer® Brand Tomato and Vegetable Insect Killer as a contact killer. Use in accordance with directions on the product label.

If you are concerned about a plant or unsure of how it will react to these solutions, test an inconspicuous area and wait 24 hours before applying full coverage. As a general rule, much like watering, do not use any liquid insecticides in the peak of the day or when temperatures exceed 90°F.