Whether you like it or not (and who would?), your home, lawn and garden may be home to a large population of boxelder bugs. These black and orange bugs have been increasing their presence in North America for some time now and can be quite a nuisance to property owners.
More Learning Resources
Going Organic » Gardening » Lawn Care » Insect Library » Plant Disease Library »Pest Animal Library » Articles »E-Books » Quizzes »

While these insects pose very little threat to your plants, they are still quite aggravating thanks to their large numbers and their ability to sneak inside homes. For boxelder bugs, it’s just a matter of survival. In the fall, they invade homes looking for warmth and will leave in the spring to lay eggs and feed.

Regardless of their intentions, your goal is to get rid of boxelder bugs, and you can do that quite effectively. There are several preventative steps you can take to keep them out of your home as well as pest control solutions to get them out of your yard and home.

Before we talk about the methods for removing boxelder bugs, let’s try to understand what these insects are doing by taking a closer look at their habits, food sources and life cycle. 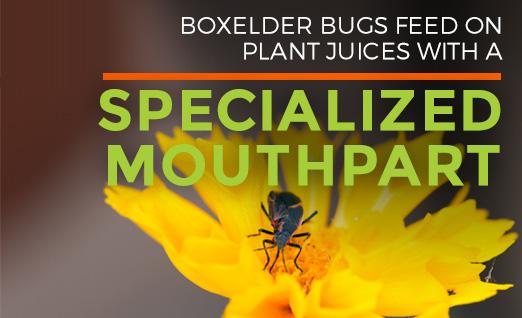 Boxelder bugs, also known as boxwood bugs and box elder beetles, are members of the soapberry bug (Serinethinae) family. Worldwide, there are around 65 soapberry bug species, and the two boxelder bug species are native to North America.

North American boxelder bugs prefer to feed on the juices found in the seedpods of the acer family of trees, which are most commonly known as maples. Boxelder maples, of course, are their favorite. Using a specialized mouthpart, they pierce the seedpod and extract the juice for nourishment.

If eating maple tree seeds was all that boxelder bugs did, few people would pay attention to them. Instead, they seem to work extra hard at drawing attention to themselves by gathering in huge groups on buildings and squirming inside structures to spend the winter!

Boxelder bugs are about a half-inch long and mostly black in color. They have flat backs decorated with orange or red lines, often outlining key features. These bugs have red eyes, wings and are good fliers. After hatching, young boxelder bug nymphs are almost entirely red or orange and their shells darken to black as they molt. 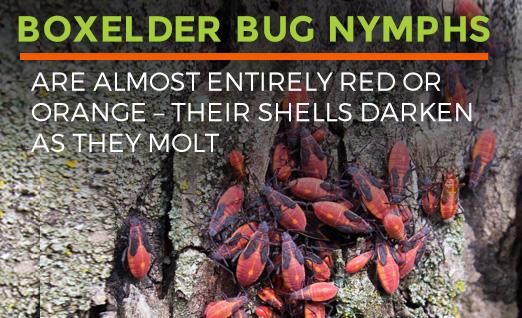 After overwintering, adult boxelder bugs will emerge from their hiding place and visit host plants to lay small, red eggs. About two weeks later, nymphs hatch from the eggs and begin feeding on the host plant.

After molting several times, these spring-born bugs produce a second generation that focuses on finding an overwintering space, which begins the process all over again.

When looking for an overwintering location, they seek out dry, sheltered areas, which can include building foundations, windows, leaf litter and wood piles.

There are two prominent boxelder bug species in North America. They tend to look a lot alike to the untrained eye – small, flat beetles with orange/red markings. Further study will reveal that the western boxelder bug (Bosiea rubrolineata) doesn’t have the red/orange wing veins that are visible on the “common” boxelder bug (Bosiea trivittata).

Milkweed bugs also bear a striking resemblance to boxelder bugs. They add white striping to the familiar boxelder bug design. Both are considered “true bugs,” meaning they have specialized mouthparts for extracting liquids from food sources, but otherwise they’re unrelated.

Where Are Boxelder Bugs Found? 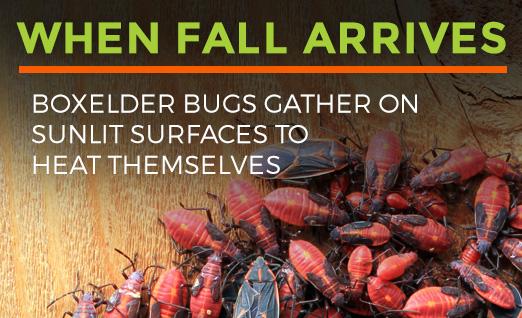 Boxelder bugs are found throughout the U.S. In the spring and early summer, they go about relatively unnoticed. When cooler fall weather arrives, these insects often gather together on the south side of human structures (including buildings, sidewalks and fences), tree trunks and rock faces to warm themselves.

They will also seek to enter homes and other structures where they can overwinter. Boxelder bugs will not reproduce inside a structure, but they may gather in astounding numbers.

How Boxelder Bugs Get Inside a House or Structure

Boxelder bugs are flat, thin beetles — a design that makes it very easy to enter a structure through small gaps and cracks. Protect your home by:

Vinyl siding offers a double-edged sword for homeowners – for the most part, boxelder bugs can’t enter the interior of the building because of the housewrap used to make it energy efficient, but the space between the wrap and vinyl siding provides an excellent overwintering site for these insects. This allows them to congregate in greater numbers, which increases their ability to survive until the following spring.

If you have a brick, stucco, plaster or brick veneer, check for gaps where different materials meet. Keep weep holes open and block them with ventilation plugs instead. 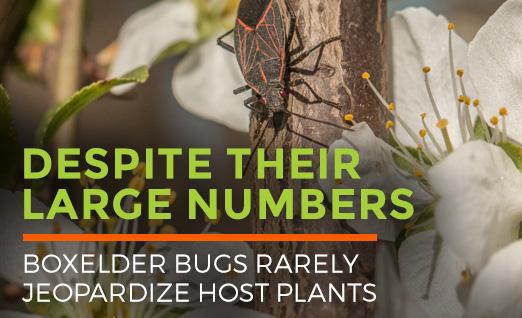 Boxelder Bugs eat by penetrating plant tissue with their needle-like proboscis. Once they’ve breached the surface, they suck out the plant juices. They mostly prefer to feed off the seed pods created by the acer family of trees, which include boxelder trees and maples.

Despite appearing in huge numbers, these insects rarely jeopardize their host trees, probably because they target seeds rather than adult trees.

Boxelder bugs are generally not considered a farm pest. Even when they do target fruit trees and berry plants, the damage is generally considered cosmetic. Grapes, for example, may see some bruising but they are still edible for people. 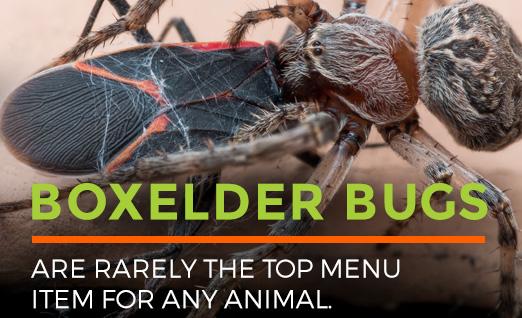 In a natural setting, boxelder bugs are rarely the top menu item for any animal. These insects produce a foul-tasting excretion when chewed or crushed. Still, when push comes to shove, a few animals will dine on boxelder bugs.

For farmers or homesteaders, chickens, ducks and guinea hens may be the answer. These birds eat a large number of insects daily, so boxelder bugs may be a tasty treat, especially if other food is limited.

How Do You Get Rid of Boxelder Bugs?

Though boxelder bugs can arrive at a home or business by the hundreds, you can take actions to keep them from getting inside and remove them from congregating en masse outside, too.

Safer® Brand offers two concentrates that serve as boxelder bug insecticides. Mix a concentrate in your sprayer and apply as needed to eliminate the boxelder bugs you are seeing.

Boxelder bugs can be a major nuisance for homeowners. Whether these bugs are congregating outside a building or venturing inside, there are methods to get rid of boxelder bugs!

If boxelder bugs manage to get inside your home, don’t squash them! They may exude a foul smell as well as leave a stain that’s hard to clean up. Instead, vacuum up indoor bugs with a bagless wet/dry vacuum that you’ve prefilled with about a half-inch of soapy water. This solution will kill them before they have an opportunity to release their smell.

You should also vacuum them out of wall voids when possible.

Don’t use insecticides indoors to treat a boxelder bug infestation. The bugs will die and attract other bugs who will feast on the remains.

Boxelder bugs feed on the juices produced by trees in the acer family and congregate in areas heated by the afternoon sun, which could include homes and other structures. These two attractants can equal problems for your household!

To get rid of boxelder bugs, you can spray trees with Safer® Brand Neem Oil® or Pyrethrin & Insecticidal Soap Concentrate II.

If you’re seeing a cluster of Boxelder Bugs, you can take action against them immediately by spraying them with Safer® Brand Insecticidal Soap and Pyrethrin Insect Killer. This insecticide kills these bugs on contact by using potassium salts of fatty acids and Pyganic® pyrethrin.

Thanks to the boxelder bugs’ defensive adaptations, very few animals will eat them. In fact, their very coloration is meant to be a warning to would be predators – “DO NOT EAT ME!”

Still, a few animals will eat them, including rodents, praying mantises and spiders. These predators are unlikely to eat enough boxelder bugs to stop or even slow down an infestation.

What Can You Do to Control Boxelder Bugs?

With so few predators, it’s up to you to you to eliminate boxelder bugs when their population escalates to pest levels. Try spraying these bugs with Safer® Brand Neem Oil, an OMRI® Listed insecticide compliant for use in organic gardening.