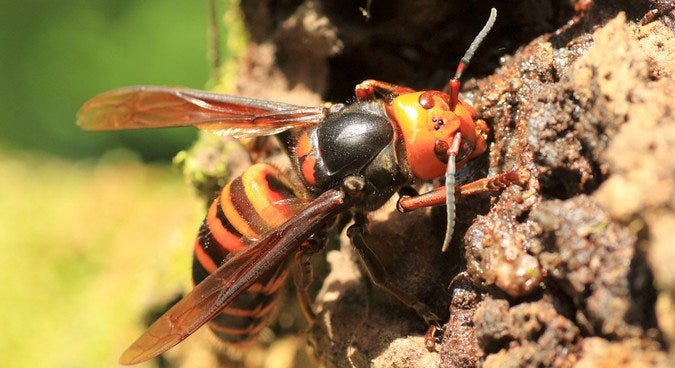 Famous Relatives: Japanese Giant Hornet (an equally large subspecies native to japan), Vespa Luctuosa (The hornet with the most toxic venom ever recorded in all of hornetdom).

Size: These hornets are considered the world’s largest hornet. Their bodies are 1.8 inches long and they have a 3-inch wingspan.

How You Might Come Across it: If you’re a beekeeper in Asia, you’ll run into these hornets regularly because they love to hunt and kill honeybees. However, in early 2020, these hornets made their first appearance in the United States. So far, they've only been spotted in Washington state.

How to Identify it: Aside from being monstrously huge, these insects are a golden orange-yellow with brown-black stripes.

What it Eats: Saliva (Yes, that’s right! They eat spit! See below …)

What Eats it: A few bird species, but not too many.

What You Need to Know: Their name isn’t a lie. Asian Giant Hornets are positively huge. These insects measure almost two inches long and have a stinger that’s almost a quarter of an inch long. That, along with a highly toxic venom, gives them some serious stinging power. In fact, when people get stung by several giant hornets at once, there’s a good chance they’ll die. Approximately 50 people a year are killed by them in Japan, which is why they have also earned the named Murder Hornets. One Japanese entomologist who’s been stung by one of these hornets said it was like having “a hot nail being driven into my leg.”


Most humans, however, don’t really need to worry about Asian Giant Hornets. These insects don’t have much interest in people and their hives are usually located in forests. Like most social species of wasps, they typically only attack when they feel their colony is threatened. So as long as people aren't showing them aggression, there's little risk. Beekeepers are the most likely people to face these deadly predators on a regular basis, but that's due to the major threat Murder Hornets pose to their hives.

It’s all because Asian Giant Hornets are voracious insect predators, and beehives offer an especially inviting target since there are so many larval insects available in one place. In fact, a small group of giant hornets can slaughter a honeybee colony containing tens of thousands of insects in just a few hours. 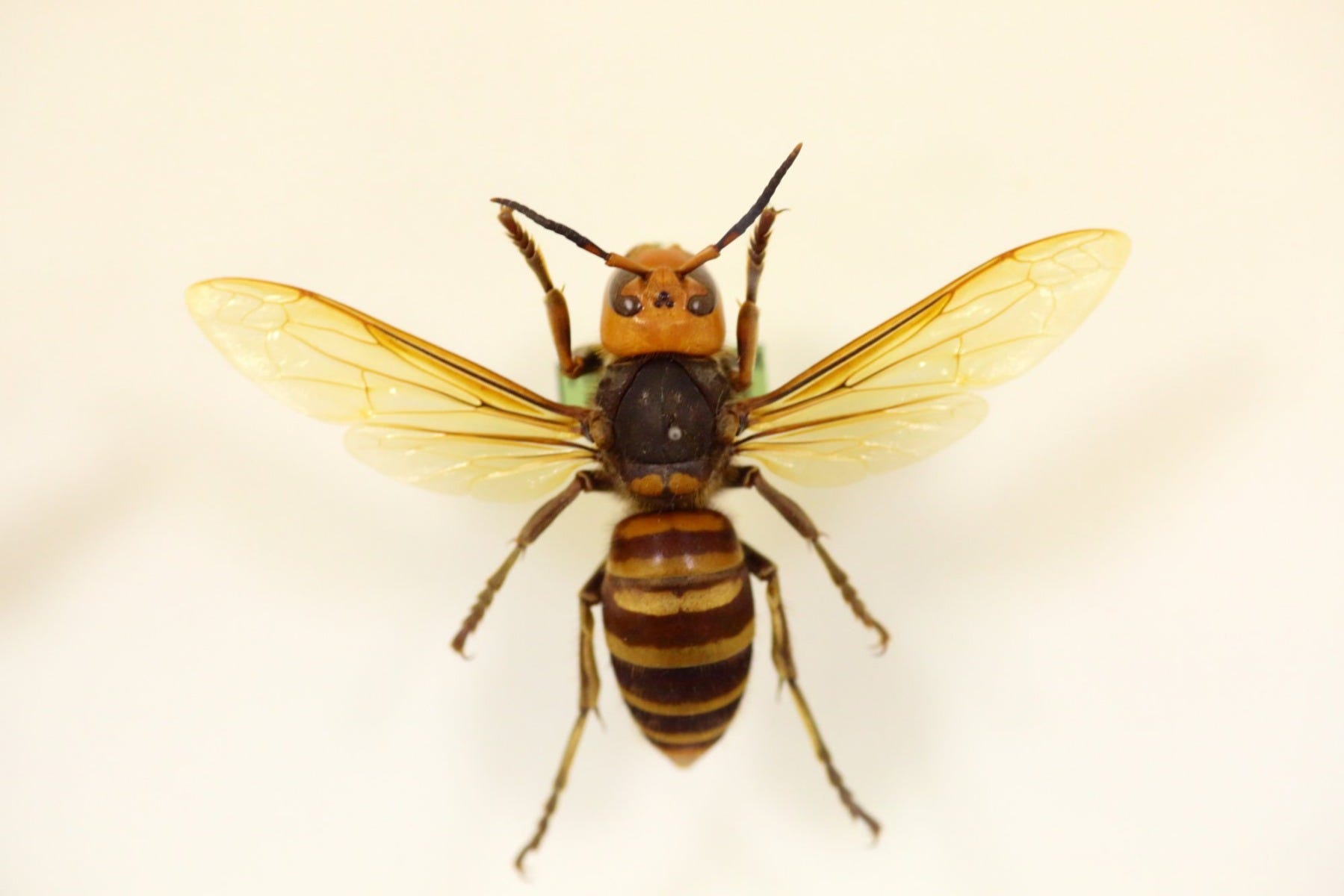 Their goal? These bloodthirsty killers want the colony’s larvae. All those adult honeybees? They're simply in the way, and the Asian Giant Hornets won’t stop the massacre until they get to the larvae they want. After such a raid by the massive hornets, there will literally be a heap of honeybee corpses under the hive and almost none of the adult bees will remain alive. 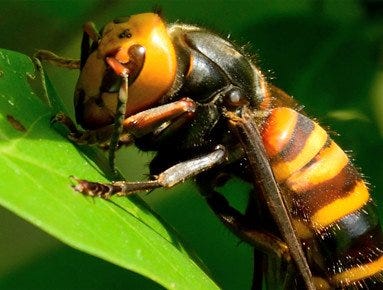 The way the Asian Giant Hornets actually consume the larval honeybees is a little crazy, though. For most animals, if you kill something, you eat it and that refuels your body. For Asian Giant Hornets, it’s a bit more complicated.

After reaching their prey, they chew up the baby bees, making a gooey paste that they take back to their hive and feed to their own larvae. The adult hornet, however, doesn’t absorb any of the paste – it gives every gooey bit to the larvae. From there, the hornet baby digests the paste to power its own growth.

What does the adult eat? Let’s just say that for Asian Giant Hornets, getting lunch is as easy as taking candy from babies! After the adult feeds the colony’s larvae, it’s quickly payback time. As a hornet larvae digests the mashed-potato version of the honeybees, it starts to secrete a high-energy saliva, and that saliva is just what the adult hornet was waiting for! The adult laps up this baby drool, which contains all the nutrients a full-grown Asian Giant Hornet needs to survive! Like we said, it’s like taking candy from a baby!