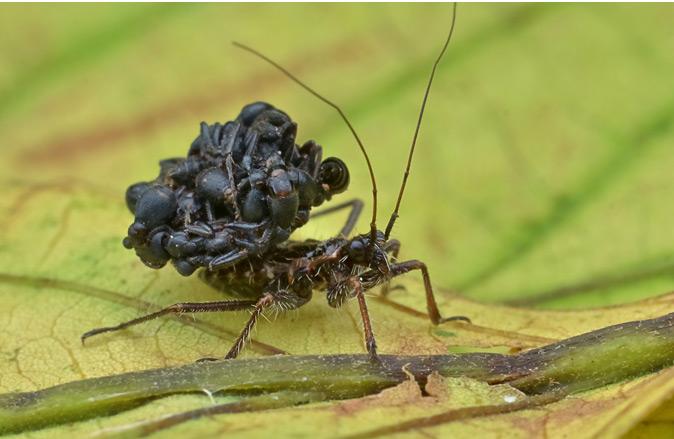 Size: Slightly under ½ an inch.

How You Might Come Across it: It is actually hard to find these bugs in nature because they are so well disguised! Still, you may spot it on a bug safari to Southeast Asia or Central Africa.

How to Identify it: This is where the Assassin Bug gets interesting! The best way to identify it is to look for a bug that has a heap of dead bugs stuck to it. (We’ll explain more below!)

What it Eats: Ants and other insects, although it has a special plan for the ants it eats!

What Eats it: Jumping spiders and other insect/arachnid predators.

What You Need to Know: Before we talk about what makes Acanthaspis petax unique among the Assassin Bugs of the world, let’s talk about how amazing assassin bugs are in the first place. 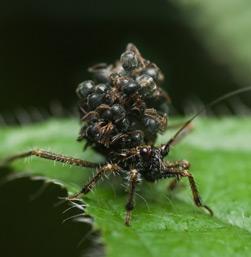 Assassin bugs are predatory, meaning they hunt down other insects for their own nourishment. The fact that they are “true bugs” is important, because, unlike ants or bees, “true bugs” have specialized mouthparts that work like a straw – they jab it into their food source and suck out all its juices. Assassin bugs do much the same, except they stab their straw into other bugs, inject them with a poisonous saliva and then slurp out their melted innards.

Acanthaspis petax is an especially noteworthy species of Assassin Bug thanks to its unique form of camouflage – the corpses of its victims! That’s right, this assassin bug hides from its own predators by carrying around a sculpted pile of dead ants.

To do so, the Acanthaspis petax first seeks out ants (and only ants) and kills them by liquefying their insides. Next, it exudes a sticky glue that it uses to stick the dead ant to its exoskeleton. It continues to add ants until it literally has a heap of them, ultimately constructing a grotesque backpack that would do the Grim Reaper proud. 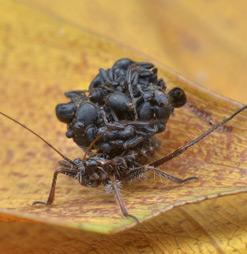 What’s strange is that after assembling this heap of corpses, it goes about hunting completely different insects! It only wants ants on its back. It doesn’t do this to any other bug.

So why does the Acanthaspis petax even bother with this gruesome charade? Scientists were wondering the same thing, so they put together a study that found that these bugs were 10 times more likely to be attacked by spiders when they were without their backpack! The scientists theorized that the pile of ants confuse spiders by creating an unfamiliar profile – if the spiders can’t recognize a shape, they won’t attack it!

Across the animal kingdom, it’s hard to imagine a more extreme sort of camouflage than the leftovers of yesterday’s lunch!