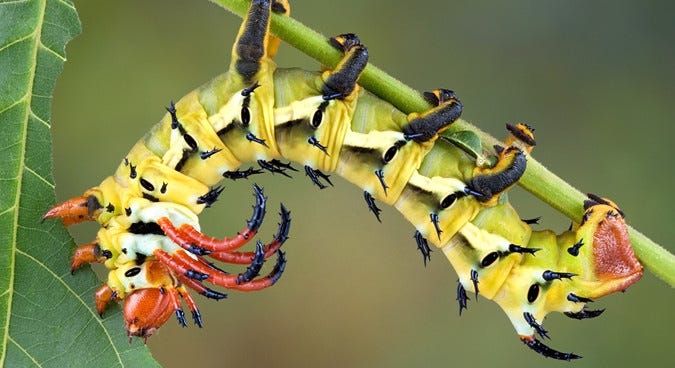 Famous Relatives: Cecropia moth (North America’s largest thanks to a wingspan up to 7 inches), Luna Moth (A swallow-tailed moth with translucent white-green wings) and the Greenstriped Mapleworm (A caterpillar that appears to be inspired by a watermelon and eventually turns into a pink and yellow moth).

Size: Caterpillars can grow to almost 6 inches long. Moths have a wingspan as wide as 6 inches.

How You Might Come Across it: In the southern U.S., look for the caterpillars munching on the leaves of your favorite trees.

How to Identify it: You won’t soon forget the Hickory Horned Devil, a gigantic green caterpillar with spikes running down its body length. It then turns into the Regal Moth, a brown, yellow and orange beauty.

What it Eats: Caterpillars eat leaves from hickory, walnut, pecan and other trees. Moths do not eat.

What Eats it: Birds and snakes.

What You Need to Know: If you were asked to draw the scariest looking caterpillar you could think of, you would hardly do worse than come up with a picture of the Hickory Horned Devil. These caterpillars, which eventually turn into the strikingly beautiful Regal Moth, are the stuff of nightmares. 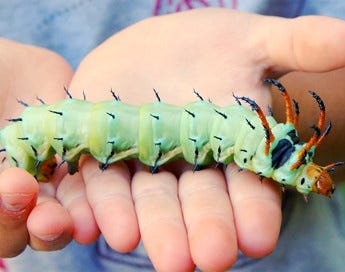 But before you go hiding under your sheets, let us assure you that these monster caterpillars are completely harmless. You can pick them up and let them crawl on your hand without fear. But picking them up in the first place will be the hard part, we promise you that!

Measuring about 6 inches long (yikes!) and about as fat as a hot dog (double yikes!), Hickory Horned Devils vary in color depending on their age – some are bright green and others are orange. Their size isn’t the only thing that makes them scary looking – they’re also ringed with prickly black spikes along the length of their body. On their heads are even more spikes – five pairs that can measure more than an inch long. Taken all together, it’s a frightening look for sure.

But hold on, aside from their crazy spikes and their giant size (they are North America’s biggest caterpillar), there’s more to say about these leaf-eating beasties. Before they grow the size of miniature mammoths, they have to survive, and young Hickory Horned Devils do this by mimicking something that no bird would eat – bird poop. That’s right, when the youngest Hickory Horned Devils sense danger, they curl up into a J-shape and just lay there looking like a splatter of bird poo. Effective and disgusting, wouldn’t you say? 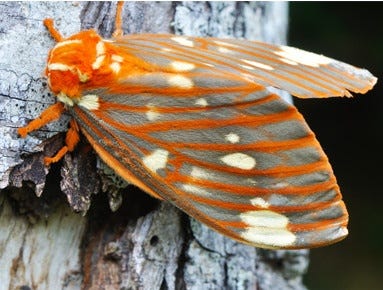 As if looking like bird droppings in one stage and a spike-covered monster isn’t enough, Hickory Horned Devils have one more trick up their sleeve. Whenever they’re under direct threat of a predator, this monster caterpillar will rear up on its hind legs and make a rapid clicking sound. The noise is effective, too, since people can easily confuse it with a rattlesnake rattle!

As we mentioned earlier, these amazing caterpillars turn into the Regal Moth, a large brown, yellow and orange moth. To make the change to moth, the devils drop from their favorite tree toward the end of summer, burrow into the ground and emerge then next summer as moths.

Have you ever seen a Hickory Horned Devil and dared to pick it up? Remember, they may look creepy, but they’ve got nothing to harm you with!

Download This Article as a Hickory Horned Devil Poster