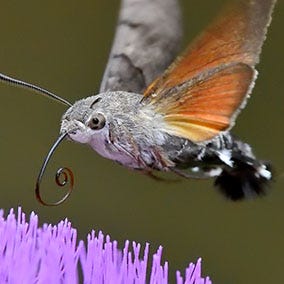 Famous Relatives: Tomato Hornworm (A North American pest that transforms into a non-hovering hawkmoth), Death’s-head Hawkmoth (A moth famously featured in the 1990s thriller “The Silence of the Lambs”)

How You Might Come Across it: Look for these buzzing moths as they sample nectar from flowers in a wide area that includes Europe, Africa and Asia.

How to Identify it: This 2.5-inch moth looks a lot like a hummingbird! It’s covered in a fine, tan- or gray-colored hair that gives its body a feathery look. Even its wings appear to be covered in feathers.

What it Eats: As a caterpillar, it eats bedstraw plants. As an adult, it seeks out nectar, just like hummingbirds do.

What Eats it: Any insectivore, including birds, bats and other animals.

What You Need to Know: The Hummingbird Hawk-Moth is an amazing insect that replicates many of the features that North Americans have come to love in hummingbirds. Like their namesake birds, these large moths are able to hover while feeding on the nectar of flowers. Their similarities to hummingbirds don’t stop there. They also generate a buzzing hum during flight and it’s not uncommon in Europe for amateur birders to misidentify them as hummingbirds even though hummingbirds only occur in the Western Hemisphere. 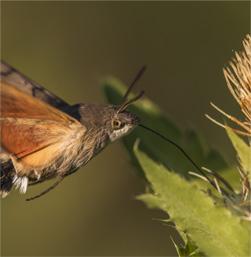 Like the long beak on most hummingbirds, the Hummingbird Hawk-Moth also has a specialized feeding apparatus – an extraordinarily long, tongue-like proboscis that rolls out from its resting, coiled shape to reach deep inside a flower. This super-straw is often double the length of the moth’s body.

Beyond their buzzing flight and fancy proboscis, these moths have a number of other interesting features, chief among them are some really weird eyes. A Hummingbird Hawk-Moth’s eyes are huge and kind of creepy looking. In fact, it will appear as though it’s watching you no matter where you stand relative to the moth’s position. This is due to an optical illusion created by its massive, compound eyes. The result: This trick of light generates a pseudo-pupil that always seems to be giving you the evil eye! 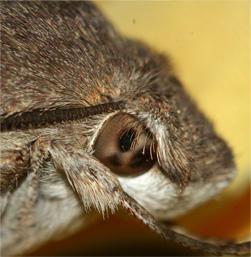 It’s also hard to remember that these wondrous creatures were once something relatively mundane – pudgy green worms. Upon hatching from its egg, a Hummingbird Hawk-Moth larva will slowly develop into a green caterpillar. After it fattens up, the caterpillar spins a cocoon and emerges later in its “alien hummingbird” form.

Around Europe, Hummingbird Hawk-Moths are also seen as a good omen. During the D-Day Invasion of Normandy in World War II, Allied soldiers allegedly spotted a swarm of these moths crossing the English Channel. Soldiers took this as a sign of their impending success to establish a foothold in France.

North and South America have hovering, flower-feeding moths as well, but they usually have clear wing membranes. No matter where they appear these hummingbird stand-ins are certainly a sight to see!