How You Might Come Across it: Planning a trip to Cancun, Mexico? Then you might just spot one of these beautiful bugs!

How to Identify it: If turquoise is your favorite color, then these stink bugs will 'wow' you! Look for their broad backs with a vibrant blue-green hue.

What it Eats: Plant juices sucked from the stems of tobacco, potato, sunflower, eggplant and rice

What You Need to Know: Like most stink bug species, the group of stink bugs that fall under the Edessa family consume their food by inserting a straw-like mouthpart into a plant stem and then siphoning out the juices. Yes, it’s a happy, juice-sucking life for stink bugs -- until trouble arises. When these bugs sense a predator nearby, they thrash their antennae as a warning and then blast out a repulsive cloud of gas. Apparently, a fierce antennae wagging and a noxious cloud is enough to drive most predators away. But even with those defenses, there’s still one more threat facing red-bordered stink bugs – a zombie apocalypse!

No matter how angry those antennae are and no matter how smelly the red-bordered stink bug gets, there’s one unstoppable “predator” to these Central and South American insects – a fungus! 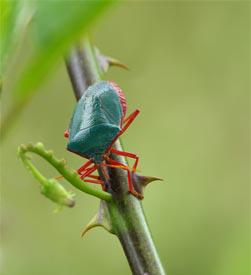 Researchers recently reported that a fungus seems to take over these bugs’ minds and forces them to do its bidding. As the fatal fungus pushes them towards death, it somehow compels the bugs to climb from the safety of the plant stems, where they normally feed, to the leaf tips.

At this point, the red-bordered stink bugs are approaching death – the fungus is affecting them so intensely that its white tendrils are literally bursting from the seams of the bugs’ exoskeleton. With perfect timing, the fungus finally kills them and the bugs freeze in place. The fungus continues to thrive, though, and with its host poised at the edge of a leaf, the fungus releases its spores which float out into the environment to create the next generation of zombie stink bugs.

Would the Edessa rufomarginata normally go out to the edge of a leaf to die? No, say the researchers, it’s the result of infection by a mind-controlling zombie fungus!

Download This Article as a Red-Bordered Stink Bug Poster