Famous Relatives: Artemis Dasher (A dragonfly that’s apparently named after a Greek goddess and one of Santa’s reindeer – just joking about the reindeer part), Banded Flutterer (This colorful bug looks like a mix between a dragonfly and a butterfly)

How You Might Come Across it: The good news is that Scarlet Darter Dragonflies are becoming easier and easier to find. The bad news is that you need to travel to Europe or North Africa to find them!

How to Identify it: Unlike most dragonflies, the Scarlet Darter is a bright red color.

What it Eats: Flies, mosquitoes, spiders and all kinds of small insects

What Eats it: Fish, water shrews, frogs, predatory insects (including other dragonflies)

What You Need to Know: In general, dragonflies are truly amazing animals. They’ve had pretty much the same anatomy since prehistoric times. Their bulging eyes provide them with near-perfect vision in a 360-degree sweep around them. This vision supplements their hyper-speedy reaction time that helps them as they hunt their prey. An aerodynamic design makes flight effortless and, with a stiff wind behind them, they can reach speeds of up to 75 miles an hour. Further, dragonflies are sheathed in a chitin armor that protects their delicate innards. 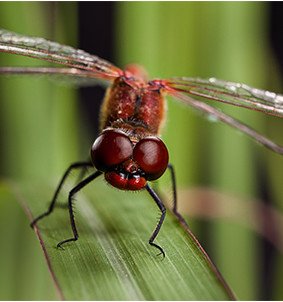 The most obvious difference between the Scarlet Darter Dragonfly and nearly every other dragonfly is its color. Most dragonflies are green, but the Scarlet Darter is – you guessed it – scarlet red. This coloration extends across the entire body – their legs, head, eyes and even the veins in their wings are red. This light, highly reflective color helps the dragonfly avoid overheating during its daytime activity.

You may have heard of the term helicopter parents, well; Scarlet Darters give a completely new meaning to the term! These momma dragonflies often lay their eggs while in mid-flight. Yes, you read that correctly! They literally bomb-drop their eggs, letting them plop into the water. Once submerged, the eggs incubate underwater. Upon hatching, the larvae stay below the surface for about one year before emerging as full-grown dragonflies.

Beyond its interesting behaviors and vibrant appearance, the Scarlet Darter is also an animal that shows how climate change affects wildlife. For centuries, the Scarlet Darter’s range kept it in Africa around the borders of Mediterranean Sea, and it was only a rare sight in Europe. Now it is common there, and countries in Northern Europe report large populations of these insects. That, of course, is great news for the Scarlet Darter, but its expanding range may be hurting other species. 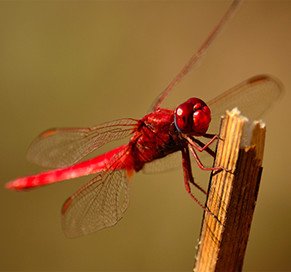 How so? As the Scarlet Darter enters a new region, it has skills that allow it to prey on insect species that have no defenses against it. This advantage could put prey insects at risk for extinction. Further, it’s now in competition with the predators that are native to the areas it is now entering. With an extra predator in the area, the food supply may run low and the native predators are put at risk. Both these issues (and many other concerns) are why scientists see climate change as a major threat.

Download This Article as a Scarlet Darter Dragonfly Poster