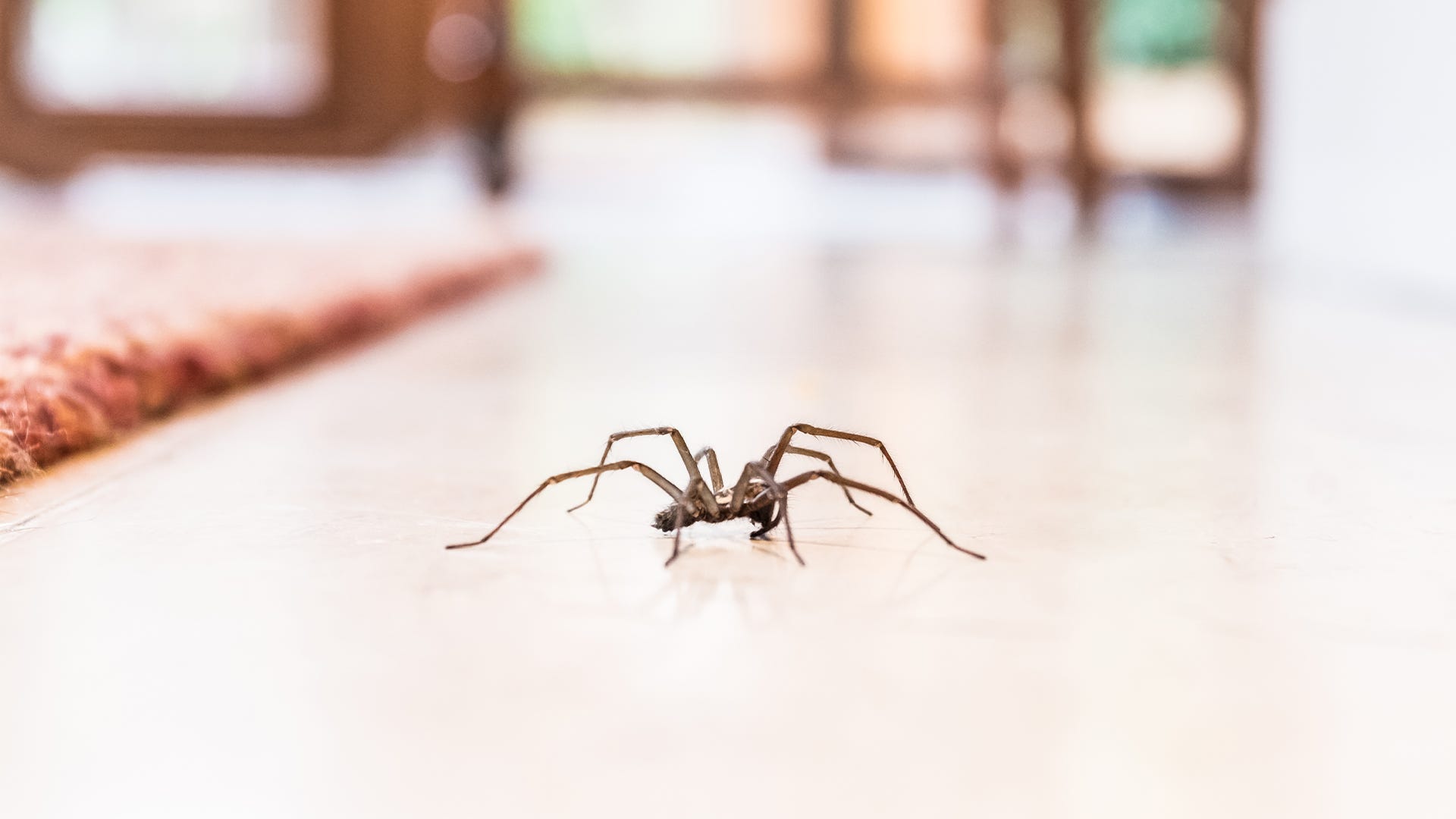 Have you noticed one too many spiders in your home? Perhaps they hitchhiked on a few boxes from the shed or maybe they’ve set up camp in the corners of your windows between the screen and glass. Whether it’s just a few or a spider infestation nightmare, here’s your guide to help recognize common household spiders to see if they are dangerous and the best way to get rid of spiders in the house.

When is Spider Season?

Some spiders live in your home all year but remain out of sight most of the time. Many of these spiders mean you no harm — they just want shelter and insects to eat. As the seasons change, spiders come inside looking for food or a mate. Late summer through fall is mating season for many spiders, so at this time, you’ll notice an increase in spiders and webs.

A variety of spider species like to share your home. Depending on the species, they may be wanderers or web builders.

Best Way to Get Rid of Spiders

Your current approach to getting rid of spiders may involve squishing them with a shoe, leaving black stains on your walls, or even having a brief freak-out because you’re not sure if you killed it. Good news! There’s a better way to get rid of spiders in your house.

However, for most spiders a Terro® Refillable Spider & Insect Trap or Safer® Brand Ant and Crawling Insect Killer Diatomaceous Earth Powder will do the trick of killing spiders without having to use a shoe. You might even find spiders weren’t the only crawling bug sneaking around your home.

The best way to avoid spider infestations is to make sure any boxes, building materials or anything brought into the home from outdoors (even Christmas trees!) are free of spiders and egg sacs. You can also take additional steps, such as:

While most spiders are harmless, many people feel better if they are not sharing their home with them. You can get rid of spiders without spraying harmful pesticides by choosing organic products and taking steps to keep spiders out of your home. 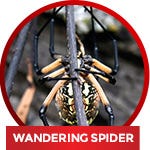 Wandering house spiders do not build webs to capture prey. Instead, they build silken webs where they hide, molt and lay their eggs. They are hunters, moving around the home looking for insects to eat or hide, waiting to ambush their dinner. 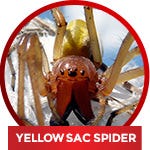 Yellow sac spiders hunt and chase prey at night, running across ceilings and up and down walls. You’ll usually spot the yellowish to light brown adult spiders in spring and early summer. You’ll see immature spiders later in the year. Adult spiders are about one inch in length, including their legs.

Yellow sac spiders spend their daytime hours in a white silken sac-like retreat, which you are likely to find in corners. These spiders do bite. While it can be painful, it does not cause any other symptoms. 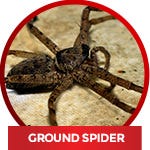 Ground spiders generally live outdoors, taking shelter under rocks and logs where they build their silken homes. They come indoors during cold weather and hunt prey at night. Ground spiders are dark brown and about one inch long, including their legs. They move about quickly.

Ground spiders don’t spin webs, but they do have spinnerets on their abdomens to produce long silken strands. These spiders are harmless to humans. 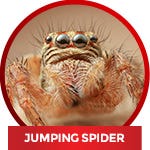 Jumping spiders are hunters and devour insects — even other spiders. They use a line of silk as a safety anchor and pounce down on prey. They usually enter the home in fall searching for food.

These spiders are also called zebra spiders because they are black with three to four white marks across their abdomen. You can easily tell them apart from other types of spiders by their very large center pair of eyes. They are harmless to humans.

While other harmless spiders are often confused with the brown recluse, you can distinguish the brown recluse by its six eyes of equal size arranged in three pairs, instead of the two rows of four that most spiders have. They also have a violin marking on the top of their heads extending to their midsection.

Brown recluse spiders are hunters that enter the home in search of prey. They are a dangerous type of hunter because their bite injects venom and can cause skin damage and other symptoms, including:

Running crab spiders hunt, but do so by sitting-in-wait for their prey while holding their front two legs out to the sides. This gives the spiders a crab-like appearance, hence their name. Adult males have dark brownish-black-colored bodies and lighter-colored legs. Females are light, yellowish-brown in color.

Running crab spiders live outdoors in gardens, but they enter the home in search of food or a mate. They are only about ½-inch long, including their legs. 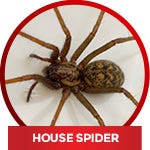 Common house spiders are yellowish-brown in color, about six millimeters long, and often occupy damp areas of the home, such as the basement. You can find them in your home anytime of the year. They are harmless to humans. 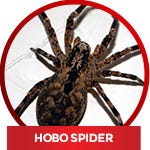 Hobo spiders prefer to live in dark areas of the home where they can build their funnel webs. You come across them in closets, storage boxes and other storage areas.

These spiders vary in size. The largest ones are long enough to spread across the palm of your hand. You can easily identify these spiders by their medium-brown color with lighter abdomen. You’ll most often encounter males moving about your home in search of a mate.

About half of all hobo spiders do not inject venom when they bite. You may not even notice a bite from a “dry” hobo spider. If a spider does inject venom, you’ll notice redness in the bite area. Within the next few days, the bite will blister and break open, leaving an oozing wound. The severity of your reaction is dependent on the bite location. A bite in an area of fatty tissue may take a few years to heal, and other complications may arise. 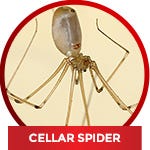 Cellar spiders get their name because they are found in cellars, garages, and crawl spaces. They have long legs, so they are often mistaken for daddy longlegs, but they are true spiders that spin webs. You’ll find cellar spider webs hanging in the corners of dimly lit rooms.

These spiders are light to medium brown with small, slender bodies and long, slender legs. 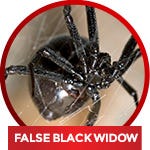 False black widows are often mistaken for true black widows because of their dark color and large, round abdomens. They spin unorganized-looking webs where they hang upside-down waiting for a fly or wandering insect to get caught in their web.

You can find their webs in areas of the home that are infrequently used, such as garages and crawls spaces. They build webs up in corners as well as at ground level.

These widows are not as dangerous as black widows. The severity of a bite can vary by person, depending on how a person’s body reacts to the bite. The most common symptoms associated with a false black widow spider bite include the following in the bite area:

If you have an allergy to their bite, you should seek medical attention right away.

You can distinguish black widow spiders from look-a-likes by the red or orange hourglass markings on the underside of their abdomens. You’ll find their webs near ground level in garages, window wells, and crawl spaces.

The bite from a black widow is very painful. Their venom has adverse effects on the nervous system. Some symptoms of a black widow bite include the following:

Here at Safer®, we want to protect your home not only from spiders, but all kinds of creepy-crawlies. To stay up to date with our products, helpful tips and tricks, and exclusive deals, sign up for our e-newsletter!