How to Keep Herons Out of Your Koi Pond 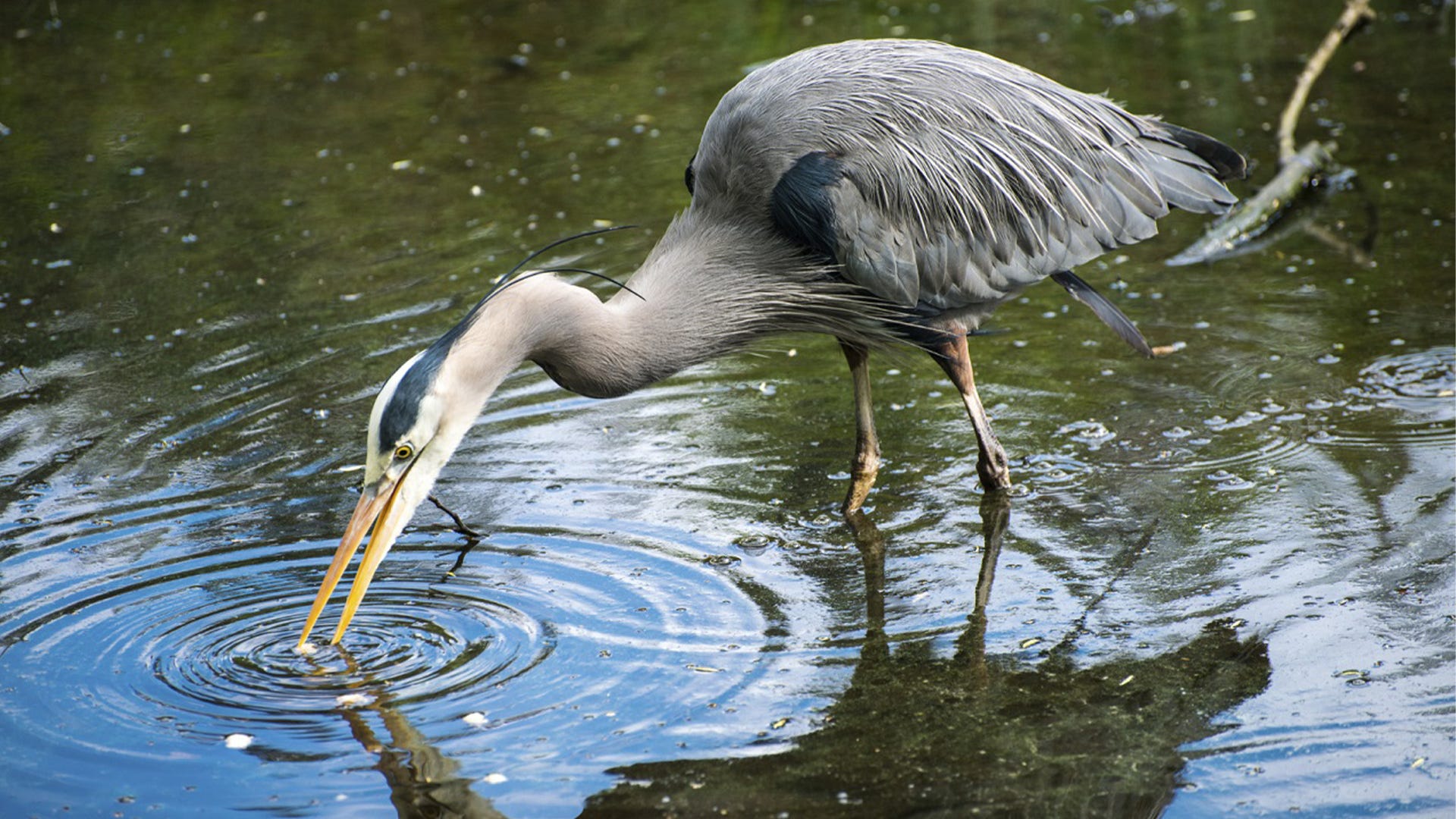 You’ve invested in an attractive pond for your property. You’ve kicked in the extra bucks to populate it with ornamental fish. The last thing you need now is for some bird to come along and rob you blind. Yet that is exactly what happens to pond owners across the country, and the greatest culprit of these feathered felons is the Great Blue Heron (also found as an all-white subspecies in southern Florida).

The Great Blue Heron is the most common of the herons that plague pond owners in the United States. Herons, among which the egret is included, are long-legged birds with necks that form an “S” when not straightened, and their long bills aid in the capture of food. Largest of these, the Great Blue Heron can reach four and a half feet in height, and its wingspan can exceed six feet.

Patient fish predators that use ambushing tactics to nab their food, herons eat fish by striking out with a lightning-quick lunge and then swallowing them whole, a superfast act that leaves scant opportunity for your precious koi fish to avoid capture or wriggle free once it is snared. That is why it is very important to keep herons from getting near the little fellows in the first place.

Since herons attack fish by wading right into the water and remaining still until their prey comes within striking distance, slopes and barriers along the pond’s perimeter act as a passive deterrent. But when dealing with a more intrepid heron, you may need to apply more stringent methods.

Rigging up netting (or using fishing lines or piano wire for you do-it-yourselfers) will certainly interfere with a heron’s approach, but it will also mar the beauty of the tranquil setting you have created. Would your beautiful garden pond really look the same with such a barrier stretched across it? 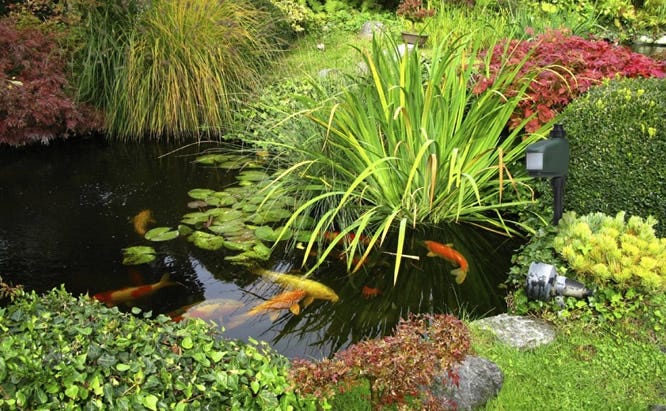 Decoys may prevent a heron from swooping down in the first place, but herons have been known to ignore these motionless animal impersonators and accept them for exactly what they are: statues. You can reposition the decoys throughout the yard to help create the illusion that they are alive, but there is only so often you can do this, and it is not likely you would do this through the night, a time when these night-or-day hunters continue to search for food. A pond cover should then be used as you slumber, dreaming of your beautiful, protected fish.

One last note regarding pond decoys: If you purchase a decoy in the form of a heron, following the premise that a heron would stay away at the sight of another one in your yard, you might inadvertently attract one. Though they are known to be territorial and will ordinarily avoid infringing on each other’s turf, all bets are off when mating season comes along!

Aerators are not only good for the pond and its inhabitants, but they offer a ripple effect that may act as a deterrent as well. Herons will be put off by the water surface agitation, and may not see the fish below as easily.

Natural visual enhancements, such as plants, offer added cover for your koi as they add oxygen to the pond and keep algae from taking over. Duckweed will provide excellent cover as well, besides offering your fish a steady food source, but some owners do not like how it easily takes over a pond's surface with an algae-like appearance.

Use Light as a Deterrent

The twinkle of light, especially when accompanied by movement, is often all it takes to make a heron reconsider visiting your yard. That is why there are a number of decorative lawn ornaments that spin and twirl - activated solely by the wind - with reflective surfaces that scatter light in all directions. Balloons accomplish this task as well, especially if shaped like a predatory bird of prey. But these are just added precautionary measures because when the sun sets and the wind dies down, you will need more reliable prevention. 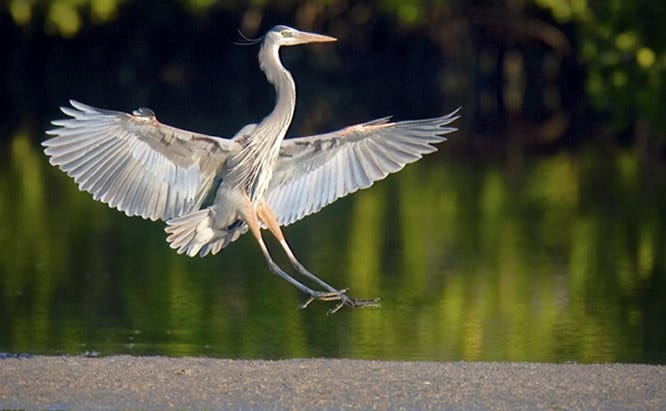 Add Sounds to Your Defense Plan

Farmers have had some success with propane-powered cannons that emit a very loud blast to scare off birds. These items may be set to go off at regular time intervals and can protect an area of over 50,000 square feet. The explosive sound is actually higher than the pain threshold for sound in humans - not to mention pets! - so it is not recommended for close communities where neighbors will be disturbed. Plus, the regularity of the blasts allows herons to accustom themselves to the noise, which is why this is often considered a temporary solution.

Wind chimes that spontaneously give off sound are a low-cost alternative and have the added benefit of reflecting light. In addition to the unexpected sound, the sudden flash or sparkle may be enough to turn away your intruder.

Along this line, you may also leave a radio tuned to a station devoted to talk show programming. Herons will avoid approaching a yard that sounds like it has people in it. This, of course, works best during the day, but at night you may wish to replace this with something that periodically sends off sounds of predators and birds in distress. There are even models with settings for which type of bird you wish to scare off. Since ultrasonic sound emitters do not work on herons, these more natural sounds are not such a distraction to people who are trying to sleep.

If protecting koi is starting to sound like a full-time job, here’s a surefire method that requires very little effort on your part. Motion-activated sprinklers will stand guard for you and automatically strike – with a stream of water – whenever their sensors are triggered by the approach of an invading animal. Turn the tables on these predators by using their own methods against them!

Plus, you may take comfort in the fact that you will be complying with federal regulations, using a repellent device that will not get you in trouble by harming any animal that may be protected under the Migratory Bird Treaty Act of 1918 – as the heron most assuredly is!

With adjustable sensitivity settings and the ability to aim upward to deter herons from even landing near your pond, the Critter Ridder Motion-Activated Animal Repellent can protect your property and detect movement from 100 feet away. 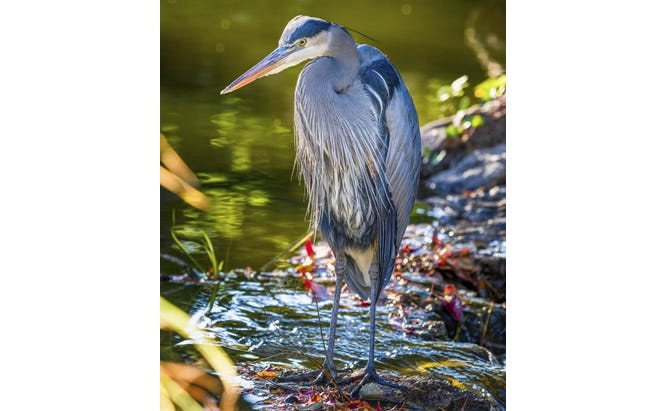 Let Your Koi Do Some of the Work

As you labor to protect your precious pond inhabitants, allow them to do their share in defending themselves. Make sure there are plenty of hideaways for them to seek cover in. Whether you prefer elaborate castles and any of the numerous designs that are available in pet stores, or more natural caves and tunnels that you build up on your own, it is important that koi have this last line of defense should an avian assault make it past your other attempts to thwart it. Herons are an adaptable bird with seemingly infinite patience when hunting, which is why they remain a problem and why inventors continue to propose new and imaginative means of dealing with them.

Do Herons Visit Your Yard?

If you have had success defending your pond – or if you’d like more advice or have questions about the items mentioned above – we’d love to hear from you. Visit our Facebook page to share your experiences with how to keep herons away, a problem that has affected so many. Get exclusive product updates and additional tips delivered straight to your inbox by subscribing to our eNewsletter.