To help with online shopping during COVID-19, we are offering free shipping on all orders $35 & over.

Due to higher order volumes, expect delivery delays of up to 7 days.

Save the Squash: How to Kill Squash Bugs

Zucchinis, cucumbers, melons and pumpkins are some of the easiest vegetables to grow — until the squash bugs take over, that is. Squash bugs attack squash and related plants. They can decimate your squash patch seemingly overnight.
Gardeners seeking to combat squash bug infestations need to learn how to recognize eggs, nymphs and adults. Once identified, you can use the right control to rid your garden of squash bugs. 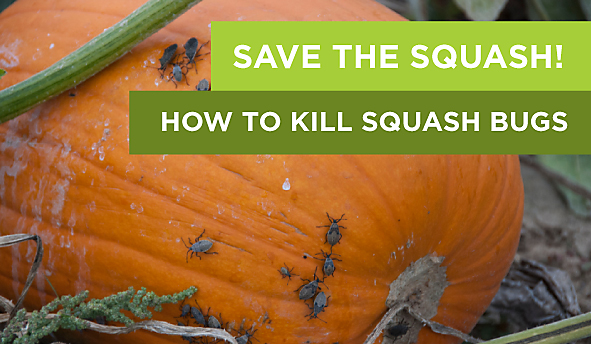 What Is a Squash Bug?

Originally from Central America, the squash bug (Anasa tristis) is a small 5/8″, brownish-black insect. The body appears armor plated, but it’s actually covered by tiny black hairs that help the squash bug feel its way around the plants. They can fly, and on warm days, they will take a short jaunt to find a mate and food. Squash bugs are sometimes mistaken for stink bugs, but they do not produce the telltale odor that a stink bug does when it’s threatened.

Adult squash bugs overwinter in garden debris such as fallen leaves. They can also hide under rocks, branches and shrubs. In the springtime, just when the garden warms up enough to plant squash and pumpkins, the adults emerge, and they’re hungry. They immediately zoom in on garden patches filled with young squash, cucumber, melon or pumpkin plants. As they gather, adults mate and lay eggs on the underside of the leaves.

Adults feed on squash leaves and stems by piercing the outer layer of the leaf and sucking out the sap. The leaves wilt at first, then curl into brownish-gray clumps and die. If the plant can’t produce enough leaves to replace the dead ones, it eventually dies.

Squash bug eggs are easy to spot. The females lay their eggs in a cluster or clump under the lower leaves of the plant. The eggs are oval-shaped and iridescent bronze or dark bronze-brown in color.

Each cluster of squash bug eggs yields approximately 12 or more larvae. As the larvae emerge, they’re ravenously hungry and want nothing more than to feed on your plants. They move about in groups, feeding in clusters until they’re old enough to spread out.

This new generation of squash bugs will eventually reach adulthood, unless you do something about it, or natural predators get to them. If they survive, it will take approximately five to six weeks for them to grow into an adult. As the days of summer draw to a close, this new generation finds safe places to hunker down for the winter. 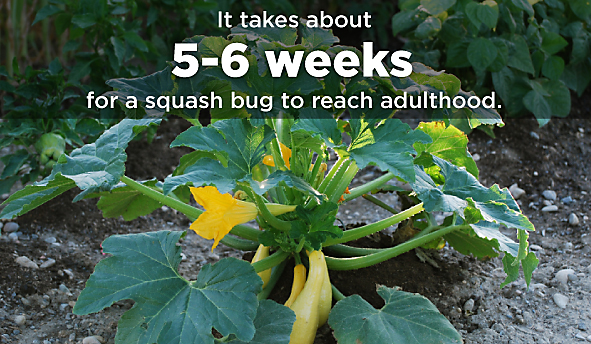 Gardens in northern areas may experience only one wave of newly hatched squash bugs each summer. Southern gardeners may have to battle two waves of squash bugs, depending on the warmth of the season. An early spring means a great opportunity for squash bugs to produce two generations of young. Constant vigilance is necessary for squash bug control.

The old saying “the best defense is a good offense” is quite true when it comes to control of squash bugs. Squash bugs are prevalent throughout the United States, and chances are good that there are some in your garden right now.

One of the most effective controls for squash bugs is a simple barrier method called a floating row cover. Row covers are finely woven cloth or plastic fabric barriers that are placed gently over plants. Some are placed over a row of flexible hoops to form a tunnel or miniature greenhouse covering. The row cover allows sunlight and moisture through to the plants, but keeps insects such as squash bugs from landing on the leaves and laying eggs. Row covers are available from online gardening supply catalogs as well as from local nursery and garden centers. 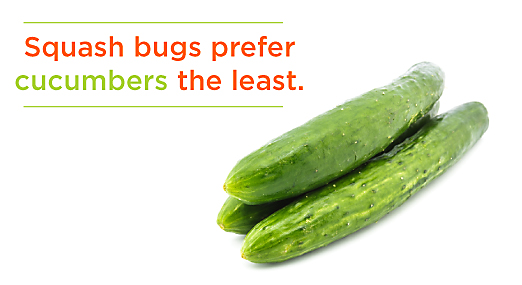 Some plants are more attractive to squash bugs than others. They love any squash, of course, but they also prefer pumpkins and watermelon. They least prefer cucumbers, so if you have a problem one year with squash bugs, try using these controls for squash bugs and plant cucumbers instead of zucchini or other squash varieties. Among squash varieties, butternut and acorn squash are also least appealing to squash bugs.

Use Transplants Rather Than Planting Seeds

Another method to discourage squash bug infestations is to transplant young squash plants into the garden rather than direct-sow seeds. Emerging seedlings are most vulnerable to squash bug attacks, and larger plants are better able to withstand a few assaults. You can start squash plants indoors in cell packs and transplant them outside when they have at least two sets of leaves, and the last frost date is past.

Growing your squash plants on a trellis, lattice or any vertical support can also reduce squash bug infestations. Squash bugs prefer to hide under leaves, between the underside of leaves and the soil surface. This provides them with the best camouflage as well as a cool, moist environment during the summer’s heat. When you grow your squash plants vertically, squash bugs lose much of their preferred environment. Trellising makes it harder for them to hide and makes it easier for predators, including birds and other insects, to find and eat them.

Not everyone has the luxury of raising their own chickens and guinea hens, but each does a great job of eating squash bugs. Guinea hens also eat ticks and other harmful bugs, and they’re an organic gardener’s best defense against insect infestations. Chickens provide manure for the soil and eggs for your table. If you have hens at home, let them loose in the vegetable garden to help control insect infestations naturally.

Crop rotation won’t prevent squash bugs per se since they will fly to find new food sources. However, if your garden appears infested with yellow cucumber wilt, crop rotation is essential to preventing the bacteria from entering new plants.
Rotating crops is an essential gardening practice that prevents nutrient depletion in the soil and reduces the chance of spreading harmful diseases from year to year among your plants. It’s a simple practice that involves planting a different type of vegetable in a location from year to year. If you’ve planted squash and cucumbers in a garden bed this year, follow it up next year with an unrelated species. Consider a nightshade family plant such as potatoes or tomatoes.

While the typical control methods above can help prevent or stop an infestation, they are often difficult or time-consuming to implement. An easier method for controlling squash bugs is spraying an insecticide that has been approved for use in organic gardening. The following squash bug controls, when applied according to the label directions, kill squash bugs without harming other beneficial insects. 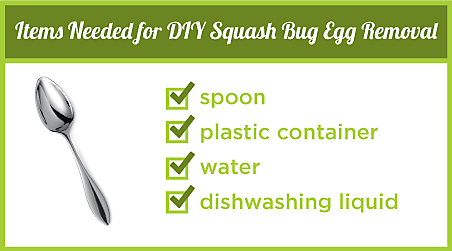 If you grow squash, pumpkins, cucumbers and melons in pots or containers, or you have only a small patch of plants growing in your garden, then manually removing eggs before they hatch into adult squash bugs may be a good control method. When combined with neem oil or insect killing soap, you may be able to keep squash bug damage to a minimum.

All you need to remove squash bug eggs is a spoon, an empty plastic or glass container, water and a bit of dishwashing liquid. Use the bowl of the spoon to scrape the eggs off of the leaves and deposit them into the soapy water. Swish the spoon around in the water and scrape the eggs again if they don’t come off easily the first time around. The soapy water dissolves the thin glue-like substance the female squash bug uses to attach her eggs to the leaves.

Another method to remove squash bug eggs is simpler but can damage plant leaves if you’re not careful. Take a piece of heavy tape such as masking tape and press the sticky side of the tape to the eggs. Then pull it off quickly. It takes some practice to remove the eggs without ripping the leaves, but this method does remove eggs without the use of pesticides.

To hand-pick adults, nymphs and larvae, don your heaviest pair of gardening gloves or a pair of rubber gloves if you’re squeamish. Fill an empty glass jar or plastic container halfway with water and one tablespoon of liquid dishwashing soap.
Use your garden hose to spray water on the infected plants. Squash bugs normally hide during daylight hours, and they’re well-camouflaged among the foliage and vines. When the water hits them, however, they move out from their hiding places and down to the lower branches of the infected plants. As they move, grab them and pop them into the soapy water. The soap coats their legs and wings, and they can’t climb out of the container. Place the lid onto the container and leave it overnight to be sure all the bugs are killed before disposing of the container. You can safely kill nymphs, larvae and adults using this method.

Similar to the method of hand-picking squash bugs off of plants after spraying them with a garden hose, you can also trick them into gathering into easily reached spots so you can pick them off of your plants. Some gardeners use boards, while others find recycled roof shingles helpful. Place these near the base of squash plants in the evening. Go out to the garden early the next day with your jar of soapy water and gardening gloves and pick up the board quickly. Adult squash bugs gather under the board or shingle, and if you’re quick enough, you can simply plunk them right into the soapy water before they know what’s hit them.

Nature provides some of its own checks and balances against squash bugs, too. The Tachinid fly is a natural squash bug predator. Organic gardeners plant carrots and flowers such as Queen Anne’s lace near squash plants to attract these natural predators to the vegetable garden. Adult Tachinid flies lay eggs on the squash bugs, and the larvae consume squash bugs as food. Adult flies feed only on nectar and pollen, so they won’t harm your vegetable plants.

Ground beetles and damsel flies will also prey upon squash bug eggs if they can find them. Farmscaping — adding rows of beneficial flowers that nurture natural predators — is a great organic gardening method that not only controls pests naturally, but also adds beauty to the garden and supports pollinating insects.

A cold winter can kill many adults and drastically reduce subsequent feeding damage next spring. While you can’t beg Mother Nature for plenty of snow and ice, you can take away the nice, comfy hiding places where adult squash bugs spend their winter vacation.

Rake up fallen leaves and dispose of them in your compost pile or trash bags. Cut back perennials and pull all spent vegetable plants from the garden. Turn over your compost pile in the fall to unearth any hidden squash bugs.

Although mulch prevents water loss in the garden and suppresses weeds, a thick layer of winter mulch may provide a comfy bed for squash bugs. Instead of using leaves as mulch, switch to pine straw or another type of mulch less likely to attract them. Straw mulch also attracts ground beetles, a natural predator of squash bug nymphs.

Organic gardening practices — such as trapping insects, hand-picking adults and eggs, planting resistant varieties and using Safer® Brand products — maintain the natural ecosystem in the garden. By sticking closer to nature’s method of insect control, you’ll not only prevent squash bugs from ruining your garden, but you’ll also keep the beneficial insects and wildlife healthy, too.