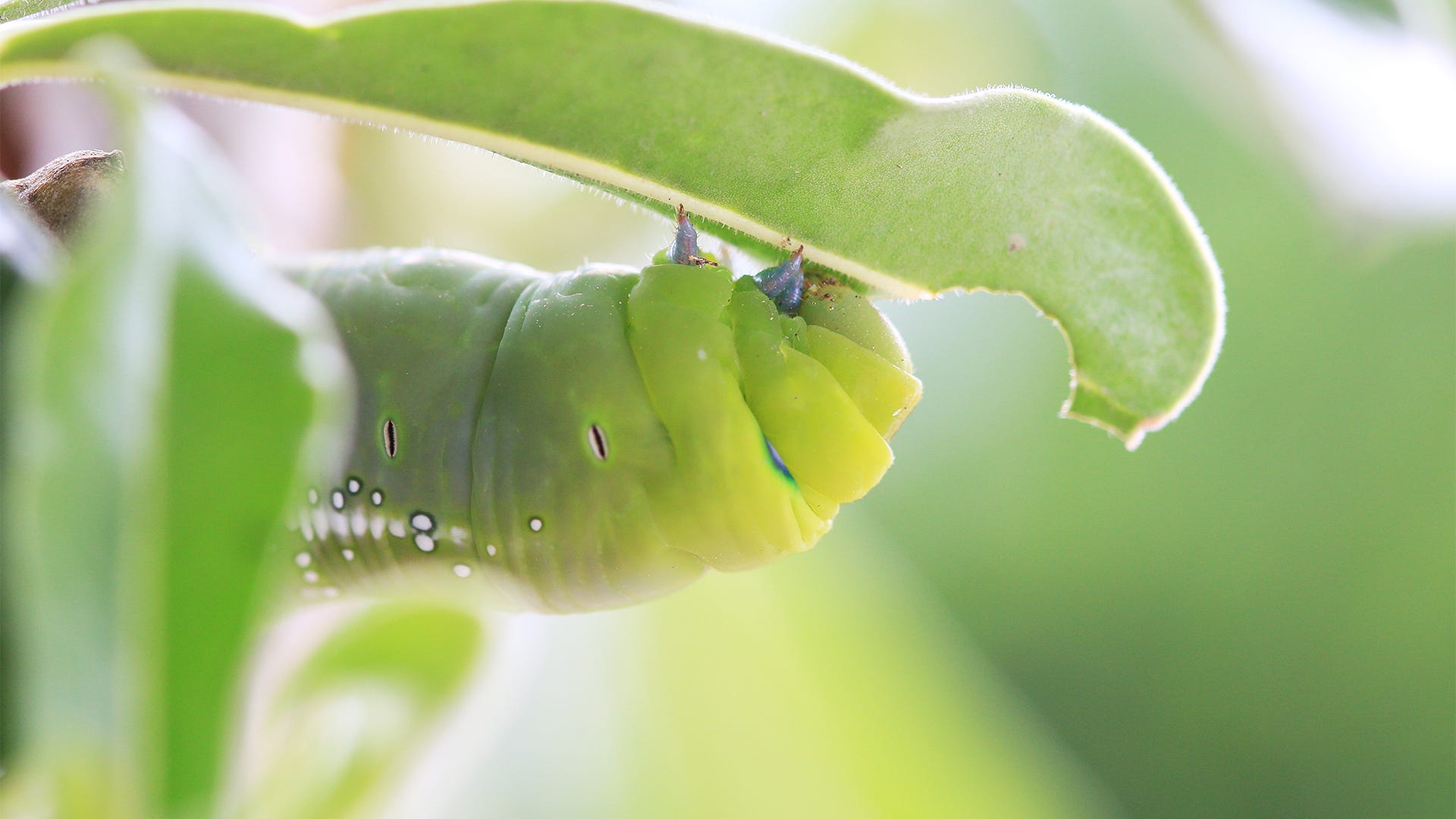 If you ask any gardener, there are very few “good caterpillars.” These eating machines can lay waste to a garden over the course of a few days and nights, often leaving vegetables inedible and dying.

TAKE CARE OF THOSE CATERPILLARS WITH SAFER®

A few caterpillars, though, are worth celebrating. Among them is the woolly bear caterpillar, a familiar fall sight in cooler regions of North America. Another favorite is the caterpillar that becomes a monarch butterfly. That caterpillar is often reared in special cages as part of a school's science curriculum.

After those two favorites, the idea of good caterpillars fades fast. In their place is a long list of vegetable, fruit, berry and tree marauders. While these caterpillars serve a place in the ecology of an area, it can be hard to convince any gardener that they should be tolerated since they can so quickly decimate a season’s worth of hard work. 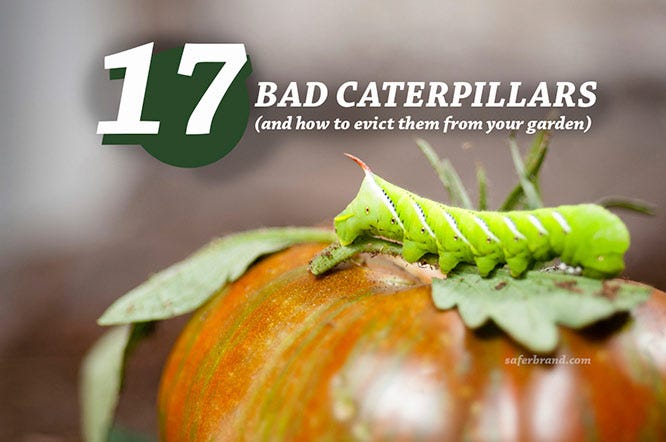 Caterpillars are not a type of animal in the same way as, for instance, cats. They are not an individual species or group of species. Instead, caterpillars are the larvae form of butterflies or moths, both of which are insects in the order of Lepidoptera.

Most caterpillars share a number of characteristics, including an elongated body and a hardened head capsule. While it may seem like caterpillars have dozens of legs, the truth is they have only six real legs. Additional sets called “prolegs” are stumpy, used for climbing and not present in their adult form.

Beyond those features, caterpillars can vary widely in appearance. Some have hair, some have spots or stripes and they come in a variety of colors, too.

What Do Caterpillars Eat?

For the most part, caterpillars eat plants to bulk up and fuel the transition into the pupal stage of life. Which plants do they eat? It varies from species to species, which explains why some plants are so vigorously attacked – it’s often the only suitable food available.

Almost every caterpillar can fall victim to a hungry bird. Caterpillars are full of protein and often easy targets for birds. What’s a little more surprising is that wasps and other insects regularly target caterpillars.

Many caterpillars are out to destroy your favorite plants, whether they’re after a seasonal vegetable, berries or a favorite tree. Some even target your lawn! Here’s a look at some of the worst: 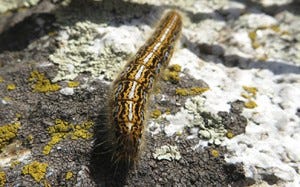 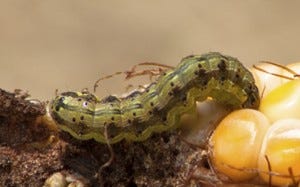 Bollworm  –  Several species of bollworm exist and many prefer to target cotton plants but they will also infest many other garden vegetables. One species, the corn earworm, is listed below in its own entry. 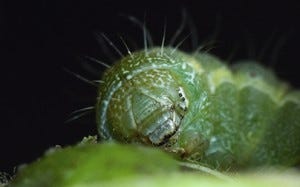 Cabbage loopers – This well-camouflaged caterpillar chews a variety of holes in cabbage leaves and is a serious pest in many gardens. 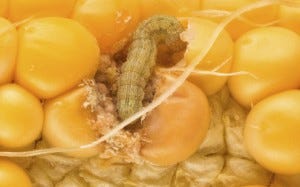 Corn earworm (also called tomato fruitworm) –  Many consider the corn earworm to be one of the top North American insect pests based on the financial damage it causes to a wide variety of crops. 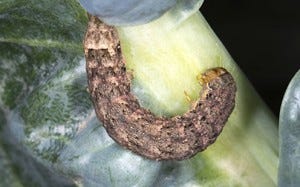 Cutworm – This caterpillar usually attacks a young garden at night, literally chewing through the stem of a young plant. This tactic usually kills the plant shortly thereafter.

Diamondback Moth – Cabbage and related plants are the prime food for this caterpillar, which probably came from Europe but is now found on several continents including North and South America. 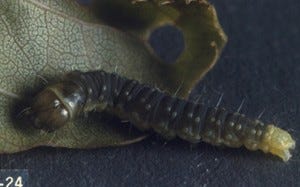 Fruittree leafroller – Feeds on new leaves, giving them a ragged appearance. In order to pupate, they roll and tie fruit tree and ornamental leaves together. Several species of leafroller caterpillars exist. 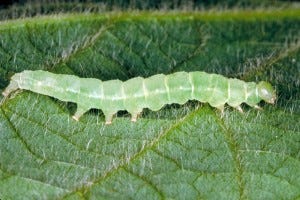 Green Cloverworm – From from the East Coast to the Great Plains, this worm is commonly found in soybean fields, although it rarely reaches pest levels. 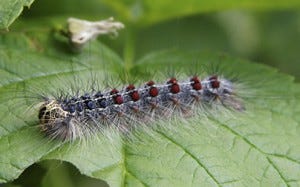 Gypsy moth caterpillar – This invasive insect has been spreading from the Northeast since 1900 and reached epidemic proportions in 1980 and 1981. Since that time, massive outbreaks have been rare. 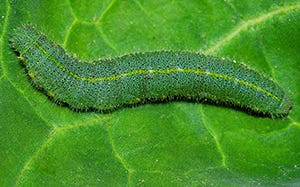 Imported cabbageworm – First observed in Quebec, Canada, in the 1860s, by the 1880s it had spread to the Rocky Mountains. It’s now widespread through much of North America.

Mimosa webworm – Introduced to the U.S. in the 1940s, this pest spins a web around leaflets and then feeds inside this protective sack. 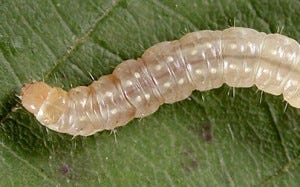 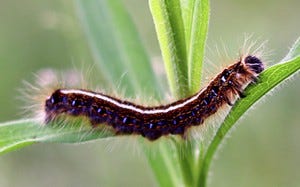 Tent caterpillar, Eastern – Tent caterpillars, the eastern tent, in particular, were first observed as far back as 1646, and these tent caterpillars experience population outbreaks every eight to 10 years. The presence of tent worms is usually indicated by the appearance of silky bags attached to the crooks of trees. 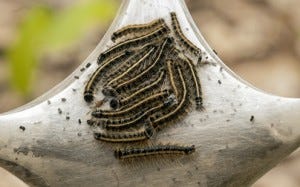 Tent caterpillar, Western – This early-season defoliator usually hita host plants in May and June. Its silken tent is usually the first sign of an infestation. 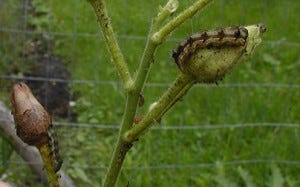 Tobacco budworm – This light-colored caterpillar bores into the buds and blossoms of a variety of plants. It is closely related to the corn earworm. 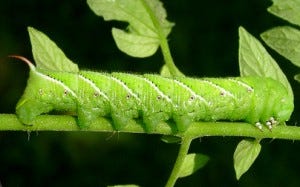 Tomato hornworm – This major garden pest targets the upper portions of its host plants with its voracious appetite. Gardeners often have a hard time spotting these large caterpillars because their color camouflages them so well. 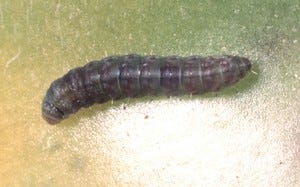 Tomato pinworm – Look for this pest in perpetually warm states, including Texas, California and Florida. Outside of these areas, this worm may appear in greenhouses. 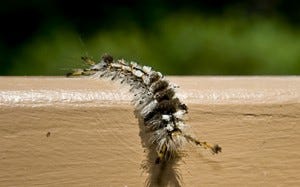 Tussock moth caterpillar – Found in the south, this hairy caterpillar can defoliate small trees and they assemble hard-to-scrape-off cocoons. Watch out, their hair can be irritating to the skin.

How to Get Rid of Caterpillars

Safer® Brand has several solutions to battle the caterpillars ravaging your lawn, garden and flowerbeds.

Two potent caterpillar fighting products that use biological control are garden dust and Caterpillar Killer, like our Safer® Brand Caterpillar Killer. These solutions incorporate a bacteria to attack the caterpillar from its inside. Once applied to foliage that the caterpillars ingest, the bacteria (bacillus thuringiensis) releases a deadly toxin in the insect’s gut that causes it to stop eating and starve to death. As further measure, the bacteria begin colonizing the creature, eating it alive from the inside.

Additional methods for fighting caterpillars include hand-picking the insects off affected plants, encouraging predators and removing nests and egg masses from the area. Many gardens will also benefit from a thorough cleanup of debris around the garden at the end of the season since many species will overwinter in leaf litter.

Your Battles with Caterpillars

Are you at odds with some caterpillars in your garden? Let us know all about your struggles! Take a picture of one of the little devils and share it with us when you visit Safer® Brand on Facebook, where you can join in on the conversation with the organic gardening community!

Looking for good info on our products? Subscribe to the Safer® Brand E-Newsletter for special tips and articles to help you in your organic journey.

PROTECT YOUR PLANTS FROM CATERPILLARS