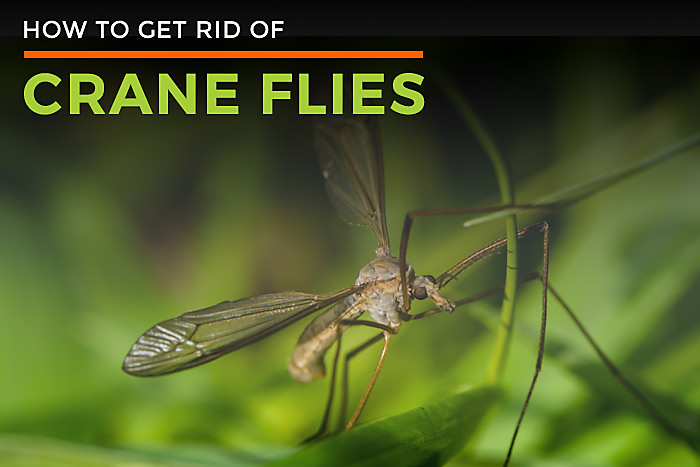 Adult European crane flies are often confused with mosquitoes, since they look like super-sized versions of those blood-sucking insects. Crane flies don’t bite people, though. In fact, they are sometimes called mosquito hawks or mosquito wasps. Despite that name, they don’t prey on mosquitoes. The truth is that European crane flies don't eat anything after they reach adulthood and are mostly harmless at that life stage. In fact, they don’t even have any mouthparts to eat with!

It turns out that the larval form of crane flies are the real troublemakers. The larvae, also known as leatherjackets, are major lawn and garden pests. They feed just below the surface, destroying plant roots and stems.

So... What are Crane Flies?

Crane flies are found all around the globe, from the tropics to sub-polar regions. These insects are true flies and there are over 15,000 species worldwide. The most common and most damaging crane fly in North America is the European crane fly.

The European crane fly resembles a mosquito in appearance, but is generally much larger (reaching up to 2.5 inches in wingspan). Crane flies are often yellow, red, brown or gray. Their antennae are long and feature multiple segments per stalk. Females may look especially intimidating, too, since they have a stinger-like ovipositor at the end of their abdomen – this feature, however, is only used to lay eggs in the ground.

The female deposits eggs in clusters or groups and adults can be found in areas that include marine, brackish and fresh water, which highlights the versatility of the crane fly. By surviving in so many different environments, it has spread across the world.

The crane fly larvae, also known as leatherjackets, look like brown or tan slugs that mostly stay underground. These grubs destroy grass and turf. Eggs are long, rounded and a dark brown to black in color.

During mid to late summer, within a day of emerging from pupating, the adult female deposits her eggs in the grass found in lawns, pastures, golf courses and other field locations. Interestingly enough, the female crane fly emerges from her pupa with fully fertilized eggs so that she can reproduce immediately.

When the eggs hatch, small brownish larvae, which look like slugs, emerge. These larvae are called leatherjackets due to their tough outer skin. The legless larvae dine on grass and clover, as well as plant and grass roots – this destructive consumption of roots can lead to plant and crop death.

When winter comes, the larvae will overwinter and then continue feeding in the spring, causing visible damage to lawns and turf. The larvae will feed until the middle of May and then do not feed as they enter the soil to pupate, usually during July and August.

Crane flies do not eat in adulthood. Instead, they ingest all their food during their larval stage. 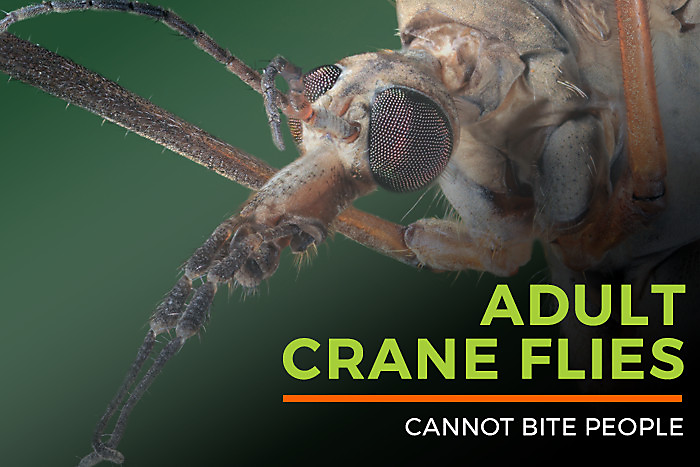 The European crane fly is not native to North America, and since its unplanned introduction in the Pacific Northwest it has become a significant lawn pest. In the eastern and southern United States, the larvae are said to contribute to the natural composting process.

Though they survive underground in grassy fields, these insect pests prefer to be near water or buried in soil that’s moist. They also seek out soil that contains organic materials. In addition, scientists have noted that the larvae also feed on flowers, fruits and vegetable plants. Their colloquial name, mosquito hawk, is a misnomer – crane flies do not eat mosquitoes or any other insects.

Adult European crane flies are often sighted around streetlights and other lights at night. In fact, New York City, along with several other northeastern United States cities, has recently documented infestations by this insect pest. 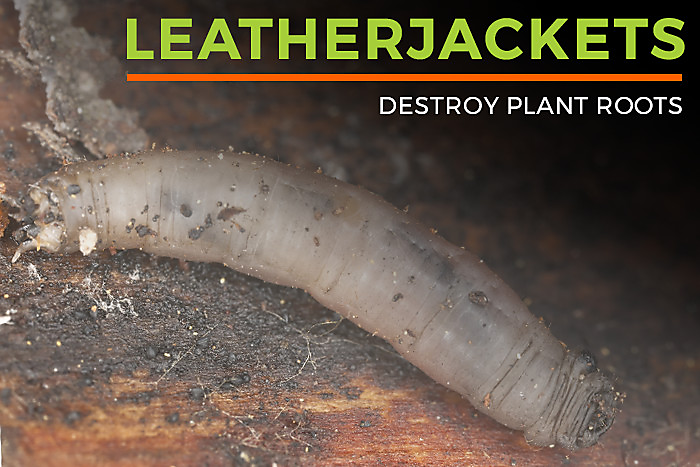 Crane flies and their larval form, leatherjackets, can be major pests, but each in their own way.

For leatherjackets, your lawn is at risk and may look "eaten" in parts. With this kind of infestation, you are likely to find uneven sections of grass that have been completely devoured, leaving only brown soil. Once a leatherjacket infestation gets extensive enough, holes may appear in your lawn overnight. These excavations are caused by skunks and other grub-loving predators as they search for crane fly larvae and other grubs. In addition, affected grasses may appear yellowed and unhealthy since they’re only receiving limited nutrients (or none at all).

Adult crane flies pose a far less serious problem, and while they won’t cause any damage, they’re still something that many people will want to address.  The issue results from adult crane flies that swarm in huge numbers, often on the sides of buildings and underneath outdoor lights. When found in such large numbers, it’s not uncommon for them to become a problem as people pass by or disturb them when entering or exiting the building. Don’t be too alarmed though, they have no interest in biting you. 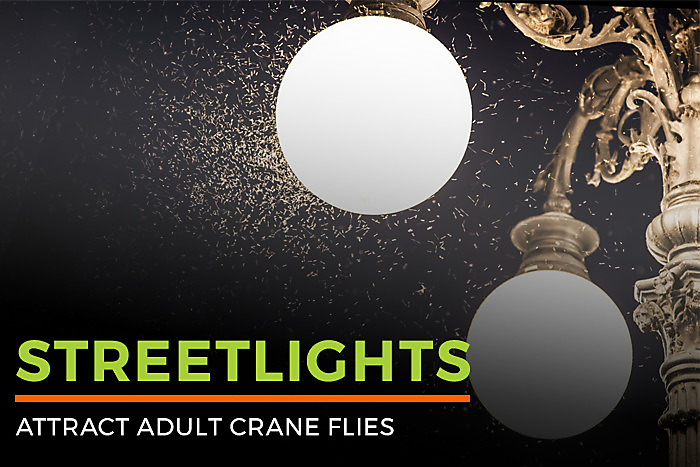 Results of a Crane Fly/Leatherjacket Infestation

Large sections of "bald" lawns may result from the feeding by the leatherjackets, or crane fly larvae. Grass may turn yellow or become thinned. Young grass is particularly vulnerable to these insect pests. Sometimes lawns and golf greens may need to be repaired, restored or replaced entirely as a result of crane fly damage.

For that reason, crane fly infestations are often particularly bothersome for golf courses and other businesses that maintain large, open fields. Not only do they ruin work put into grounds keeping crews, but they also disrupt customer enjoyment and can trigger a loss in revenue. 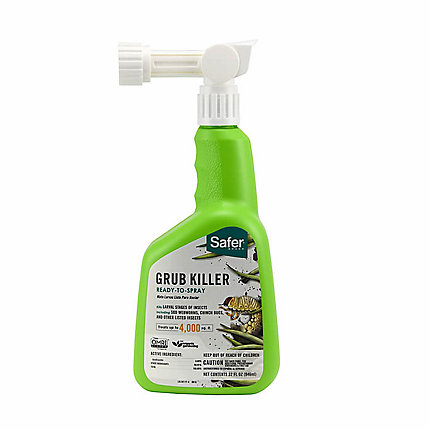 For leatherjackets, use a grub killer that contains azadirachtin to stop the crane fly infestation at the source: the soil, which is where leatherjackets live and feed. They will also target vegetables and flowers, killing the plants from the ground up. When exposed to azadirachtin, a compound found in the seeds of neem, leatherjackets are subjected to a natural growth inhibitor that halts their development. Even better, the azadirachtin breaks down within 7 to 10 days. 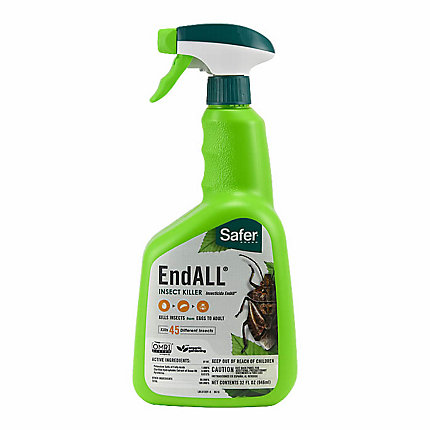 If you are concerned about a plant or unsure of how it will react to these OMRI Listed® insecticide solutions, test an inconspicuous area of the plant and wait 24 hours before applying full coverage. As a general rule, much like watering, do not use any liquid insecticides in the peak of the day or when temperatures exceed 90°F.

Why Choose a Safer® Brand Solution?

As such, many of our insect-fighting treatments quickly break down to their natural elements to limit the impact on the environment. Organic gardeners prefer OMRI Listed® resources because chemical pesticides often leave residuals where they are applied. Because of this, organic growers fear synthetic chemicals will create long-term, detrimental effects to the environment. 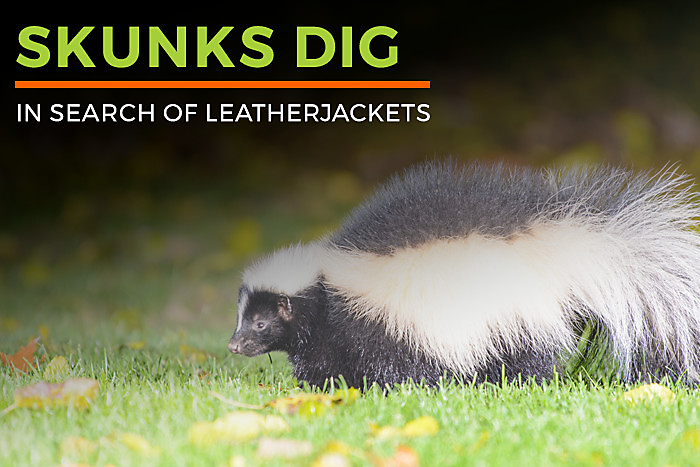 Natural predators of the crane fly include birds, skunks and other grub-eating animals. Unfortunately, some of these predators may also do damage to the turf under which the grubs are living. To reach these tasty morsels, an animal will tear through the groundcover, digging holes to get a taste of these grubs. Obviously, this isn’t the best solution to control European crane flies in your yard. Instead, try OMRI Listed® treatments, which are a great method to stop this damage before it happens.

Birds, skunks and other grub-eating animals will dig into the ground to find the grubs while larvae is near the surface or after they’ve come out for surface feeding. In digging, these grub-loving animals can cause unsightly holes in the turf.

Birds usually eat grubs during the daytime, but skunks and other grub-eaters come out under the cover of night to find the crane fly larvae.

European crane flies, like other crane flies, appear to favor moist environments. So, keeping the ground from being too moist, fixing areas with poor drainage, and avoiding using sprinklers at specific times in the life cycle of the European crane fly may be helpful in controlling this insect pest.

Removing some of the crane fly larvae may also help control an infestation.

Do not water between the time the eggs are laid and the time in which the first crane fly larva develops. Repair areas that have poor drainage around your yard and home.

At night, go out into the yard and rake up the larvae as they come near the surface to feed.

Do not water between the time the eggs are laid and the time in which the first instar (the developmental stage) larva develops. Amend poor drainage areas, particularly those with standing water, as soon as you see the moisture or water pooling.

Larvae may breach the surface at night and will be easier to find when it is dark.

Safer® Brand brings you a variety of  insect control products that are gentler on the environment! Most of them proudly display the OMRI Listed® organic seal and are compliant for use in organic gardening!