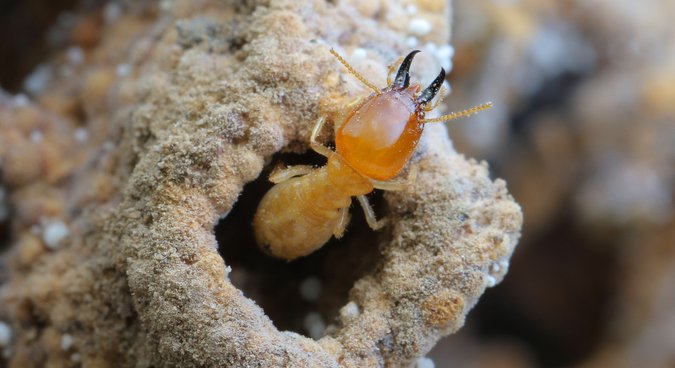 FAMOUS RELATIVES: Eastern subterranean termite (The most common termite in North America) and the dampwood termites (Termites that – you guessed it! – only eat damp wood). SIZE: This species of termite varies in size depending on its role in the colony. Queens can be more than 4 inches long, while workers are about 1/10th of an inch long. HOW YOU MIGHT COME ACROSS IT: A visit to Africa or Asia, where you may spot a thin, tall mound that seems to defy gravity. HOW TO IDENTIFY IT: You’ll only rarely see it above ground, but it’s a buttery brown and yellow insect with a big head and plump body. WHAT IT EATS: Dead plant material and cellulose. WHAT EATS IT: Short of the major apex predators, just about every animal type will eat termites, which are often protein rich and abundant, even during drought and famine periods.

WHAT YOU NEED TO KNOW: Across the southern hemisphere, there’s one type of insect that seems to dominate the landscape. That’s because these insects – termites -- literally make the landscape!

Here in North America, termites are known as destructive pests that invade our homes, slowly devouring and weakening the wooden framework. In fact, people spend thousands of dollars to eradicate termite nests on their property.

In Australia, South America and parts of Asia, termites are seen differently. They are viewed as architects that construct rather than destroy – and they are so good at construction that their work can stand for decades.

Mound-building Termites, of course, build mounds, earthen structures that contain complex systems of tubes and tunnels that connect to the colony’s home and garden. Termite mounds can be almost 100 feet around and the most gravity-defying mounds can be up to 25 feet tall. The result is that wherever mound-building termites flourish, they tend to dominate the landscape. People compare these landscapes to the look of a cemetery full of headstones or a forest where all the treetops have blown away. 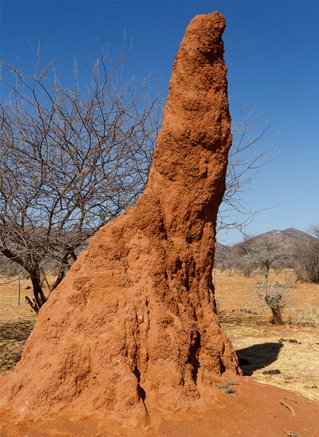 Termite mounds are wonders of engineering and probably don’t function exactly as you think they might. For example, a common misconception is that the termites live inside the mounds, which they don’t. Instead, they live under the mounds and the mound structure itself serves as a sort of chimney for the colony living below.

Why do termites need a chimney? It’s all about the numbers. Colonies can be millions of termites strong and all those bodies – no matter how small they are – do a lot of breathing! The mound acts as an air-circulator for the colony, cooling fresh air as it comes all while expelling carbon dioxide-rich gas and heat.

Not all mounds feature a sky-high chimney, though. The Macrotermes bellicosus species of termites have two mound styles – the first is the standard chimney and the second, used in cooler forests, is more dome-like and is built to retain heat rather than flush it away. Another species, found in Australia, builds its mounds in a wedge shape, and orients it to the magnetic poles. This position allows them to warm in the morning and shed heat in the afternoon. That’s some quality architecture!

What accounts for a mound’s decades-long durability? They may look like they’re just made from mud, but it’s actually a hard, cement-like mix of dirt, clay, plant materials and the glue that sticks it all together – termite saliva. The result? A structure that survives monsoons and baking heat in some of the most unforgiving territories in the world.