Ants are found throughout the world. They are very social insects and live in colonies consisting of a queen, female workers, and males. The species of ant determines where the ants are found. Ants usually live and build their nests in mounds outdoors, in wood structures, or in plants and trees. Using a product such as the Safer® Brand Ant and Crawling Insect Killer uses the power of Diatomaceous Earth to eliminate a variety of crawling pests.
More Learning Resources
Going Organic » Gardening » Lawn Care » Insect Library » Plant Disease Library »Pest Animal Library » Articles »E-Books » Quizzes »

Ants are generally between 1/3" to 1/2" in length and black or red in color. Its body is made up of three segments which are surrounded by an exoskeleton that protects its internal organs. Its remarkable antennae can sense changes in air pressure, perceive odors, and feel movement and vibrations.

There are three kinds of adults living in a colony: the queen, female workers, and males. The queen, the largest ant in the colony, is the only ant capable of bearing offspring. Usually there is only one queen in a colony, but some species of ants may have multiple queens.

A queen is capable of living up to 30 years, ten times longer than female workers - so it is easy to see why colonies can become so massive. Although the queen may help tend the larvae, it is usually the female workers' job in most colonies.

Female workers are always smaller than queens, although they can vary in size among themselves, depending on the species of ant. Females result from fertilized eggs and can live up to 3 years. These workers spend their entire lives tending to the larvae, building and repairing the nest, bringing food to the colony, and fighting off enemies of the colony.

Males, unlike females, develop from unfertilized eggs. They do not assist the female workers in their duties. Mating with the queen in the colony appears to be the sole purpose of the male, who usually expires in about 10-14 days afterwards.

Ants go through four stages of development: egg, larva, pupa, and adult. After the queen lays her eggs, they will hatch in a couple of days into helpless larvae whom workers will feed and groom.

The larvae then develop into the pupal stage where it will remain for a week or more and then emerge as an adult ant.

Ants are found throughout the world. They are very social insects and live in colonies consisting of a queen, female workers, and males. The species of ant determines where the ants are found. Ants usually live and build their nests in mounds outdoors, in wood structures, or in plants and trees.

During the winter months in colder regions, ants will become inactive, while in warmer regions, ants continue their lives at their normal pace. Eliminating ants can be a major problem. But using a product such as Safer® Brand Ant and Crawling Insect Killer you can eliminate the pests without harming your family or your pets. Best of all, since diatomaceous earth is a mechanical killer, insects are unable to develop an immunity to diatomaceous earth.

Methods of controlling ants include ant baits, especially those made with boric acid or diatomaceous earth, glue trays, and pheromone traps. Since ants do not usually harm the environment and are actually beneficial, leave outdoor colonies alone. 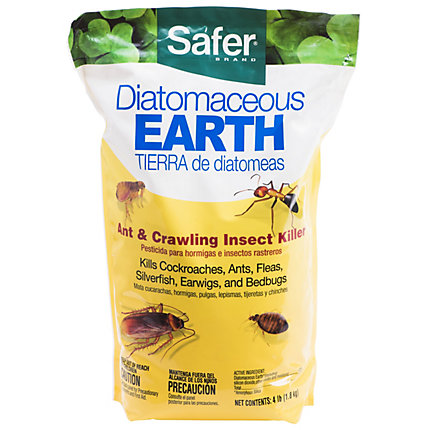 Boric Acid is deadly to ants, roaches and other crawling insects. Some boric acid products contain a food and or pheromone attractants. When using straight boric acid, mix a small amount of boric acid to foods that ants will eat.

Sweet or greasy foods usually attract them. Mix at a ratio of 1 teaspoon to a cup of the food you are using for bait. Ants will take some of the boric acid back to their colony for other ants, assuming it is food, and feed to larvae, other workers, and even the queen. The colony can be severely damaged or eliminated.

Although boric acid is relatively nontoxic, keep it away from children and pets. It should be enclosed in a bait station or placed in an area inaccessible to children or pets.

Diatomaceous Earth is a dust-like product that contains the crushed fossilized remains of diatoms. The dust is ingested by the ant and affects the cuticle of the ant, resulting in its dehydration. The best part about DE is that insects cannot develop a resistance to it since there are no chemicals to which they can develop an immunity. If the area where the DE is applied becomes wet, it will need to be reapplied.

Glue traps have a sticky surface that prevents the ants from escaping once they have ventured onto the trap. These traps are easy to use, since you only need to release the paper that protects the glue surface and place the glue trap along the ant trail.

Pheromone traps lure ants as well as other crawling insects, and once inside the trap, the insects cannot escape. 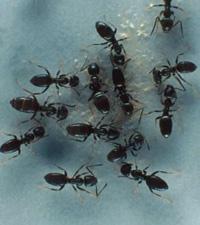 Ant bait may take a few days to take effect before results are noticed. Setting the bait as soon as ants are spotted, however, will help in reducing the infestation as soon as possible. The longer you wait, the more time it gives the colony to produce more ants.

Why Choose a Solution?

Solutions break down quickly into their natural elements. They are preferable to chemical pesticides that leave residuals where they are sprayed causing long-term detrimental effects on the environment.

Anteaters are obviously predators of ants, as their name implies. Other predators include spiders, toads, and lizards. Ants themselves can be predators of other ants, as well.

Predators of ants find ants to be most abundant in the warmer months, generally when they are most active.