Lawn treatments for ticks may be necessary year round in warmer climates but in more seasonal climates, tick treatments are probably only necessary in the spring & summer.

Ticks are members of the arachnid group, having eight legs in the adult stage and lacking antennae at all stages. There are two groups of ticks: hard ticks and soft ticks. The main focus for this website will be on hard ticks, which are encountered much more frequently than soft ticks; in fact, some people will never encounter a soft tick. Both groups of ticks are capable of transmitting certain diseases to animals, while the hard tick is responsible for transmitting diseases to animals and people.

Perhaps the three most recognized hard ticks are the American Dog Tick, the Brown Dog Tick and the Blacklegged Tick, commonly known as the Deer Tick. Although each tick has certain species-specific characteristics, there are some characteristics all hard ticks have in common. Besides eight legs and no antennae, these ticks have a hard shell with the mouth area attached directly to the shell.

All ticks, whether hard or soft, go through four stages of development. Females will lay their eggs after feeding. When the eggs hatch, the emerging miniscule six-legged larvae feed on a nearby host. After going through one or more molts, a larva becomes a nymph with eight legs. These nymphs in turn will molt and become adults who are ready to feed and reproduce.

Ticks are found throughout the United States, mainly in outdoor areas with woods, shrubs, weeds, and tall grasses. They are particularly found in humid environments. The only ticks generally found to live indoors is the Brown Dog Tick. Other ticks may enter the home via a pet or person who has been outside in tick-friendly areas.

Spraying lawn to treat ticks is the best course of action to prevent a tick outbreak. Using a product such as Safer® Brand Mosquito and Tick Killer will keep your lawn free from ticks. 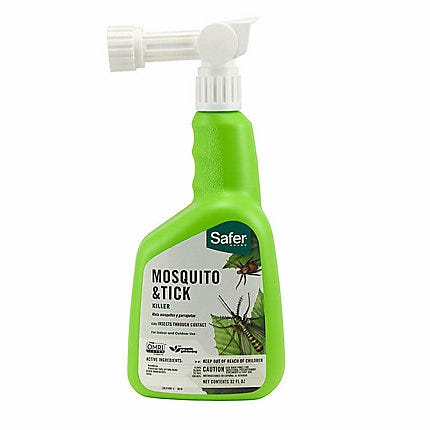 Insecticidal soap and pyrethrin-based sprays such as Safer® Brand Mosquito and Tick Killer are best used in combination for tick control.

Insecticidal Soap (Potassium Salts of Fatty Acids) & Pyrethrin - These solutions are combined to create the equivalent of a one-two knockdown punch. The soap will penetrate the tick's shell enough to weaken and dehydrate the arachnid and allow the pyrethrin to absorb in to the tick and do its job.

Pyrethrin is a nerve agent and will paralyze and kill the arachnid on contact. Keep in mind this soap is not like dish detergent, it's a base from a blend of plant sources and pyrethrin oils and comes from the chrysanthemum flower.

Spray Safer® Brand Mosquito and Tick Killer as a contact killer for your entire lawn area. Use in accordance with directions on the product label.

Ticks can be present at any time of year. Their activity decreases in colder weather and increases in warmer weather. Also, many species of ticks will go into a state of diapause when food sources are scarce. Diapause is similar to hibernation except the animal does not grow during this time or molt to the next stage of life.

Lawn treatments for ticks may be necessary year round in warmer climates but in more seasonal climates, tick treatments are probably only necessary in the spring & summer.

The parasitic wasp lays its eggs inside a tick and when the eggs hatch, the emerging wasps kill the tick and feed on it. Attract these wasps by planting nectar or pollen producing flowers. They can also be bought commercially. 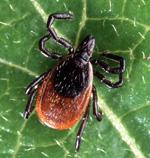 Several birds feed on ticks, and the Guinea fowl is perhaps one of nature's most efficient predators when it comes to devouring huge amounts of ticks. Guinea fowl can be raised, although it may take some work on your part.

Plant attracting flora early in the season so parasitic wasps may be present when tick larvae emerges. Most local greenhouses and garden centers can help you determine the right planting time for nectar and pollen producing plants to ensure that the pollen and nectar will be available when the wasps arrive.

Most wild birds can be attracted with bird feeders, although you do want them to eat the ticks more than the bird seed! Guinea fowl can be outdoors at any time of the year, just be sure they are protected from predators. Wild birds and Guinea fowl will eat ticks largely during the summer months or warm weather when the ticks are most active.