The larvae do not look anything like their parents. They look somewhat like alligators with their long narrowed dark bodies and spiked projections!

Extremely beneficial to gardeners and their gardens, the adults and larvae will  prey on aphids, spider mites and mealy bugs.

Ladybugs are also known as lady beetles or even ladybird beetles. In European countries they are referred to as "ladybirds." Adult lady beetles are round beetles measuring no more than 3/8" in length. They can be red, orange, or black in color with or without spots.

Larvae are said to look somewhat like an alligator in its shape with tiny spiked projections and orange striping on its blue or black body. Ladybug eggs are yellowish or whitish, oval-shaped and laying in clusters.

Prey of the Ladybug 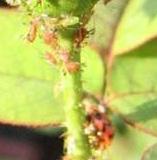 The favorite foods of ladybugs include aphids, spider mites and mealybugs. They will also prey on eggs of some insects, particularly the European Corn Borer and the Colorado Potato Beetle.

Ladybugs in both the larval and adult stages feast on these insects. Interestingly, a ladybug will devour thousands of aphids in its lifetime!

Many species of ladybugs are found throughout the United States, although one, the Asian lady beetle, was more recently introduced into the United States. Ladybugs are generally found in agricultural fields, orchards and gardens where their favorite foods, aphids, insects and mealybugs can be found.

In the Fall, ladybugs will gather in large numbers in places where they will spend the winter - usually under rocks, leaves, old fallen trees and any other location sheltered from the weather.

They will sometimes aggregate on the outside of a house in the warmth. If they venture onto or into homes, they may appear to be somewhat of a pest to homeowners, but do not harm them, since they are so beneficial. Take them outside when you find them inside of your home. You may want to seal or caulk cracks and around windows to prevent them from entering your home.

Ladybugs, or lady beetles, are considered a beneficial bug which helps rid an area of crop-damaging aphids, mealybugs and other destructive insect pests.

The adult ladybugs feed on these insects.  They also lay their eggs among the aphids or other prey so the emerging larvae can feed on the insects, too.

The only time they are considered to be "pests" to people is in the fall when the weather gets cooler, and the Asian lady beetles enter homes and other buildings in large numbers in search of a warm place to overwinter.

Vacuuming these beetles and discarding the bag may be the most effective method of removing these insects from your home. Remember, we don't want to remove them from fields, orchards or gardens since they are so beneficial.