These stealthy predators feast on live insects, including moths, mosquitoes, roaches, flies and aphids, as well as small rodents, frogs, snakes and birds.

The praying mantis will feed on moths at night -- the only predator known to do so. They can definitely assist in moth control around your home and garden.

So... What's a Praying Mantis?

The praying mantis is an amazing insect, with its unusual shape, praying appearance, voracious appetite and many beneficial aspects.

The praying mantis grows up to 6 inches in size, depending on the species and age of the mantis. Most praying mantises only live about a year.

Prey of the Praying Mantis 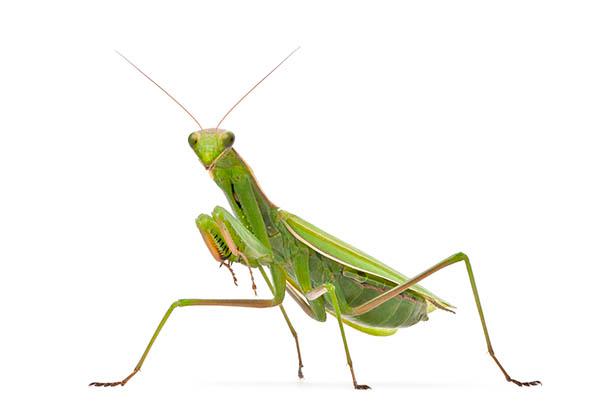 These stealthy predators feast on live insects, including moths, mosquitoes, roaches, flies and aphids, as well as small rodents, frogs, snakes and birds.

They hunt by either waiting quietly for approaching prey or by actually stalking the hapless creature. With the ability to rotate its head almost 300 degrees and its mastery of camouflage, it is a most skilled hunter. It also uses its camouflage to protect itself from predators.

They do not harm or bite people, although their legs have tiny spikes that may feel sharp if held.

The Praying Mantis is found in many differing habitats. They are generally located in the warmer regions, particularly tropical and subtropical latitudes. Most species live in the tropical rainforest, although others can be found in deserts, grasslands and meadowlands.

Praying Mantises usually appear in early to mid Fall, generally around the end of September through the first part of October. Females will lay their eggs which will hatch in the springtime. Newly emerging nymphs will go through several stages until they develop into adults.

Praying Mantises may also be purchased commercially. If you are purchasing the eggs through a commercial breeder, be sure to have plenty of insects available for the nymphs to eat or else they will resort to cannibalism.

A praying mantis has a very big appetite, so it's fortunate that it is also an accomplished hunter. These magnificent insects help farmers and gardeners by eating moths, mosquitoes, roaches, flies and aphids, as well as small rodents in their fields and gardens.

The praying mantis will feed on the moths at night -- the only predator known to do so. This large insect is also the only predator that is quick enough to catch mosquitoes and flies (not counting spiders who do not need to catch their prey themselves, relying instead on their spiderwebs).