Scale insects can be devastating to fruits, ornamentals, trees and houseplants if the infestation is severe. Two of the more common types are the armored scale and the soft scale. Since scale suck the sap or juices from plants and plant leaves, the leaves may turn yellow and fall off. The plant may die.
More Learning Resources
Going Organic » Gardening » Lawn Care » Insect Library » Plant Disease Library »Pest Animal Library » Articles »E-Books » Quizzes »

Scale insects can be devastating to fruits, ornamentals, trees and houseplants if the infestation is severe. Two of the more common types are the hard scale and the soft scale. Many similarities occur within these two types, although there are some notable differences that can affect which methods of control you select. 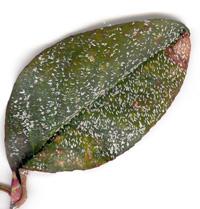 Both species' females have a rounded shape and range in size from 1/10"-1/5" in diameter. They do not have legs or wings and cannot fly.

In the soft scale species, females are larger than males who resemble very small flies. The female hard scales produce a waxy protective substance over themselves and their eggs, often making control a challenge.

In both species, the nymphs begin as tiny crawling insects, but then after a short period, they settle down, lose their legs, and stay in one spot, with the female hard scale becoming immobile. The female soft scale does not lose its legs, but they become so small they rarely move anywhere. The male scale of both species become small fly-like insects.

Female scale may have live offspring or may lay eggs. The nymphs, after they are born or hatch, crawl around for a short period of time to feed and then go through a stage where they lose their legs or their legs become very tiny. They stay at one place, immobilized for the rest of their short lives.

The nymphs or eggs of scales spend the winter amid the cracks and crevices of tree bark. Female scale may also overwinter.

Over 1,000 species of scale can be found in the United States and Canada. Soft scales are found throughout the U.S. and Canada, while the hard scale is found largely in the southern regions of the U.S.

They thrive in fruit bushes and fruit trees, ornamental plants and shrubs, and shade trees as well as houseplants.

Since scale suck the sap or juices from plants and plant leaves, the leaves may turn yellow and fall off.

Honeydew on foliage is another symptom indicating the possible presence of scale. Scale may also appear on fruit as brown, red, white or gray dots.

Scale can weaken plants when they suck their juices, causing leaves to yellow and fall off, resulting in the eventual death of the plant.

Honeydew on plants may attract ants as well as sooty mold, which is a black fungus that can result in the death of the plant. 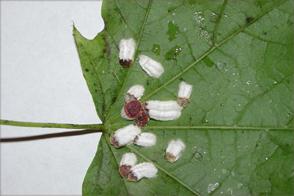 Insecticidal soap, made from potassium salt of fatty acids, works by penetrating and destroying the outer shell or membrane of the insect causing it to dehydrate and die.

Use all neem oil products by following the instructions since, as an oil, there is greater risk of phototoxicity (burning). Avoid using sulfur based fungicides within the active period of the neem oil product. These two products combined greatly increase the risk of plant burn. 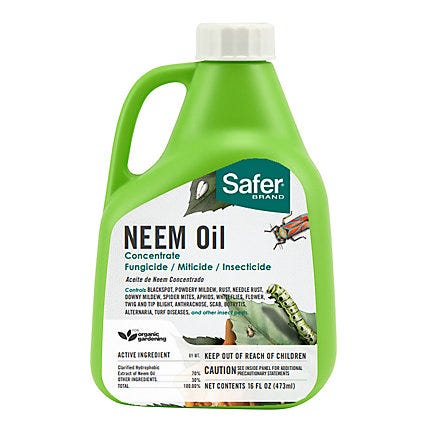 Carefully read and follow all instructions on the product packaging for best results. It is recommended with any pesticide to test plants for sensitivity to the product. Spray a small section of the plant in an inconspicuous area and wait 24 hours before applying full coverage.

Best time to apply treatment is when crawlers are present. Usual calendar times are April, late May-early June, and September, depending on the scale species.

Since these formulas are contact killers and they do not persist in the environment, several applications may be needed for full control. As a general rule, much like watering, do not use these products in the peak of the day or when temperatures exceed 90 degrees F to avoid wilting or browning of the leaves.

Parasitic wasps and predatory beetles may help effectively control an infestation of scale.

To aid the organic gardener, parasitic wasps and other parasitic insects can be purchased through a commercial insect breeder. Make sure if you purchase these insects you have an actual garden insect infestation or you may notice parasitic wasps migrating to your neighbor's yard in search of food.

In the spring, parasitic insects may lay their eggs in the larvae of scale insects. Since scale can be at different stages throughout the entire growing season, predatory insects should be beneficial throughout that whole time.

Plant nectar or pollen producing plants as indicated by the temperature and climate zone of your area. Most greenhouses and garden centers can help you determine the right planting time to ensure the pollen and nectar will be available for the predators when they arrive.

Physically observing and removing scale from plantings is a control method that, when used in conjunction with other methods, can help effectively reduce scale problems or infestations.

Check your trees, shrubs, and other plantings for scale. Cut and discard any affected branches containing the scale. You can physically remove soft scale from plantings with your fingernail or soft brush or cloth. When removing the scale, add soap to the water, then rinse fully.

Check throughout the growing season for scale since they can be at different stages throughout the entire season. Check in the fall and winter for overwintering eggs and remove the infested branches immediately, before they have a chance to hatch.