So... What's a Colorado Potato Beetle?

Adult Colorado potato beetles are approximately 3/8"-1/2" long with rounded bodies and yellow and black striping on their wing covers.

The larvae are approximately 1/8"-1/2" in length and have a reddish coloring with two rows of black dots on each side of its body.

The eggs are found in clusters of 20-40 on the undersides of plant leaves and are yellowish-orange in color.

In the spring, the adult Colorado potato beetle emerges from the soil where it overwintered. The beetles will start walking in search of food, and if after several days, it cannot find any suitable foods, it will take wing and fly until it finds food.

After eating for 2 to 3 weeks, and going through several instars, or mini-stages, the larvae will dig into the soil and pupate. In another 5 to 10 days, the new adults will come out of the soil ready to eat again in preparation for spending the winter in a pupate stage under the soil.

The Colorado potato beetle is found throughout North America today. It was not a scourge of the potato plant until the westward movement in the United States.

Holes in the leaves of potatoes, tomatoes, peppers, eggplants and tobacco often are an indication of the presence of the Colorado potato beetle. Plants may begin to wilt as they are infiltrated by this pest.

If left untreated, the plant's leaves may be devoured and the plant's strength and growth will be affected. In addition, young plantings may end up dying while older plants, although they may survive an onslaught, may have a drastically reduced yield. 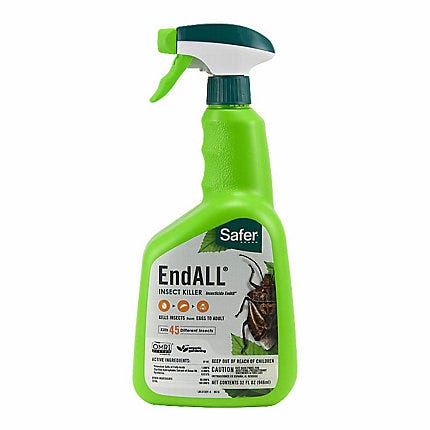 Colorado Potato Beetle controls are a good method for eradicating these pests. There are products on the market containing insecticidal soaps and pyrethrins that can be used safely when following the directions on the product.

In addition, Azadirachtin is an insect growth regulator which is derived from the neem seed. It is a good method of controlling the Colorado Potato Beetle.

Insecticidal Soap (Potassium Salts of Fatty Acids) & Pyrethrin - combined are the equivalent of a one-two knockdown punch. The soap will penetrate the insect's shell enough to weaken and dehydrate the insect and allow the pyrethrin to absorb into the insect and do its job.

Pyrethrin is a nerve agent and will paralyze and kill the insect on contact. Keep in mind this soap is not like dish detergent, it's a base from a blend of natural plant sources and pyrethrin oils and comes from the chrysanthemum flower.

Azadirachtin interferes with molting and insects will die. It kills the larval or grub stage of the insect. Use in accordance with directions on the product label.

Spray Insect Soap & Pyrethrin as a contact killer. Use in accordance with directions on the product label.

Apply at the first sign of grub activity. You may need to re-apply Azadirachtin after every 7 days or so to affect newly hatched Colorado potato beetle grubs.

Why Choose a Pest Solution?

Thankfully, many people are starting to realize that products that are compliant for use in organic production are the best solutions available. Why exactly are these products preferred? These solutions break down quickly into their natural elements. They are preferable to chemical pesticides that leave residuals where they are sprayed, causing long-term detrimental effects on the environment.

Plus, if you’re using the wrong insect-control products on produce, these chemicals can make their way into your food, eventually reaching your home and family. You put your love and sweat into your garden because you want to put great food on the tables of your family and whoever else eats your produce. So you want to choose a product that befits the fruits of your labor.

Birds, frogs and beneficial insects will eat the Colorado potato beetle, but if a fairly large infestation has occurred, these helpful predators will not be present in adequate numbers to control such an infestation.

Birds, frogs and insects eat the beetle as well as the eggs and larvae. You can attract the birds through the presence of birdbaths and birdhouses and the insects by the planting of pollen producing foliage.

Place the birdhouses and birdbaths near the plantings as soon as you can to attract birds. When the weather is favorable for planting pollen producers, immediately plant them to attract beneficial insects as soon as possible. Most local greenhouses and garden centers can help you determine the right time for planting these to ensure that the pollen and nectar will be available when the predators arrive.

Handpicking of the beetles in small areas with limited infestation may be helpful, but again, for larger infestations, this will not be able to sufficiently control the beetles.

Using sturdy, larger plantings that grow rapidly may also help in controlling the presence of the Colorado potato beetle.

Handpicking or hand-brooming the plantings to brush off the beetles may be helpful. When brooming, be sure to do it gently and brush the beetles into a cup of soapy water which can be discarded when finished.

Larger plantings that mature early can be picked early, thereby eliminating a food and egg-laying source for the beetles and larvae. Another possible method is to plant the potatoes later in the season when most of the beetles have left the area.

Hand pick and hand-broom the Colorado potato beetles as soon as you see them. Doing this upon sighting them will help control the population of the beetles.

As soon as the weather in your planting zone allows, begin planting the sturdy, older plantings. If this is not possible, you may want to wait until after the beetles have left, but be sure to use a fast growing variety of potato so it matures before frost arrives.