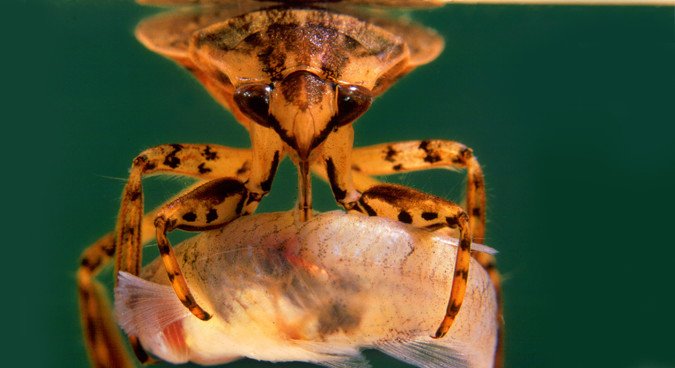 How You Might Come Across it: Water bugs, in general, are found all over the world in ponds and marshes. Find the L. deyrollei, probably the most aggressive of water bug species, in eastern Asia.

How to Identify it: Look for a large, flat-bodied bug with a brown body and extra-long (and intimidatingly thick) forelimbs

What Eats it: Large fish, aquatic birds and amphibians

What You Need to Know: If you know any hunters or fishers, you’ve probably heard a fish story—an often exaggerated story of difficult hunt or monster-sized catch. “It was this big,” the storyteller will say, stretching his or her arms wide to show you just how gigantic their prize was. 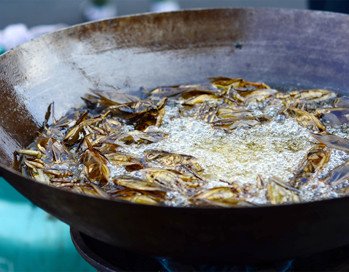 Giant Water Bugs, if they talked to one another, would probably be just as boastful at the kinds of catches they make because, for the most part, they are able to catch some real whoppers! Giant Water Bugs live up to their name—most measure more than 2 inches long—and they aren’t afraid to hunt prey much larger than themselves!

In fact, these semi-aquatic predator insects, also known as alligator ticks, electric-light bugs and toe-biters, regularly hunt and kill fish, frogs and salamanders—animals that are often twice their size. If that’s not impressing you, then maybe some of their even more exotic and larger prey will—visit YouTube to see one wrestling a garter snake. Then there’s the verified report from a Japanese bug researcher who has pictures of these hunters successfully snaring and killing a baby turtle!

How can a bug kill a turtle or a snake? Just take a look at the Giant Water Bug! At the beginning of an attack, the Giant Water Bug uses its huge, powerful forelimbs to capture and pin its prey. Once it has a secure grip, the water bug inserts its rostrum—a needle-like mouth part—into the prey and then secretes its deadly saliva. The powerful spittle makes a smoothie out of the creature’s innards, and the Giant Water Bug happily slurps it up. 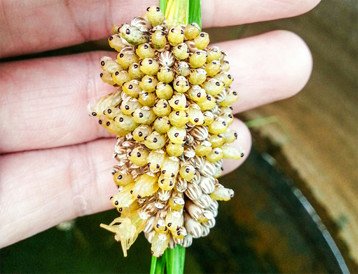 Of course, life for a Giant Water Bug isn’t all about hunting. They also have to watch out for people since fried Giant Water Bugs are sometimes served in Asian cuisines. One food critic said they taste like “watery scrambled eggs with a strong black licorice flavor.”

Another interesting facet of Giant Water Bug life is their family values. After the female Giant Water Bug lays her eggs on a plant growing out of the water, the male Giant Water Bug does his half of the parenting duties. He guards the weird clutch of eggs until they hatch. In fact, he even waters the eggs regularly by dropping in the pond below, climbing back up and allowing the water to run off his body and onto the eggs.

The clutch of eggs, by the way, is supremely weird looking—it’s basically a glob of writhing insect eyes in a ring around the plant. As they eggs mature, the bodies attached to the eyes begin to look more and more like adults.

Once they’re ready to leave the clutch, the babies break free, drop to the water and begin hunting for their own fish, frogs, snakes and turtles. With their big appetites and legendary predatory skill, someday even these Giant Water Bugs will to catch something big enough to brag about in their own fish story!

Download This Article as a Giant Water Bug Poster