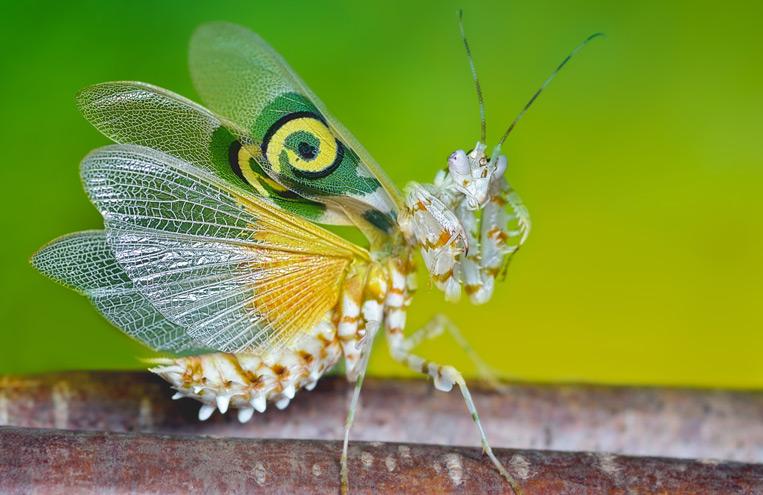 Famous Relatives: Ghost Mantis (A praying mantis that looks like a dead leaf), Japanese Boxer Mantis (A mantis with thick forearms, which it fidgets to communicate with others of its own kind)

How You Might Come Across it: In the wild, you can find it on a trip to Africa, though you're more likely to see it as someone's pet.

How to Identify it: This mantis is a hard one to forget! Its forewings feature a psychedelic spiral and when opened, they form two eye spots. Beyond that, its exoskeleton is covered in fierce-looking spikes.

What it Eats: Like most mantids, the Spiny Flower isn't a very picky insect eater! If it's small enough, a Spiny Flower Mantis will strike!

What Eats it: Thanks to their camouflage, Spiny Flower Mantids aren't preyed upon very often, but any insectivore will eat them.

What You Need to Know: If you're wondering what a punk-rock insect might look like, wonder no more. The Spiny Flower Mantis fits the bill visually and even has a bit of a punk-rock attitude to boot! To begin with, look at how this insect dresses – it's loaded with spiny barbs, which it mixes with a splotchy green-and-white color scheme.. Some individuals also include some hot pink in the mix as well. 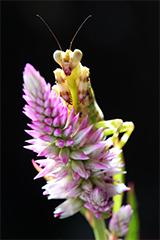 To match their look, these insect-eaters are also quite feisty. If you hazard too close to one, it lets you know you're not a welcome visitor by flipping up its forewings to reveal a deimatic display – a pair of scary-looking eyespots that are meant to startle would-be predators. The Spiny Flower Mantis doesn't stop there – if you're still too close, it will also spread out its arms to look bigger and even more imposing.

Let's be clear, though, the Spiny Flower Mantis actually has two kinds of appearance-based adaptations – the defensive display we mentioned above and its hunting camouflage. You see, its spines and flamboyant colors aren't part of its defensive show – they're meant to mimic the appearance of the African plants where it dwells. The spikes (and occasional pink-hued individuals), for example, are a close match to certain flowers. The result: Perfect camouflage!

Male and female Spiny Flower Mantids are a bit different physically – females are wider and bigger. The male also has fewer spines. When mantids mate, the female produces an ootheca – an egg case – that carries up to 55 eggs. When they hatch, they're tiny, black and can easily be mistaken for ants.

Unless you're planning a trip to Africa, it's unlikely that you'll see the Spiny Flower Mantis in the wild. The good news is that they are one of the more popular mantids to keep as pets, which means you could actually see one in real life. In fact, you could even raise one of your own.

What do you think? Are you ready for a punk rock praying mantis?

Download This Article as a Spiny Flower Mantis Poster