The Story of Japanese Beetles (And How to Fight Them)

The Japanese beetle is a major plant pest in North America, eager to chomp through the leaves of hundreds of ornamental plants, fruit trees and vegetables. These imports from Asia have been in the U.S. for more than a century and are a real bane for many gardeners. 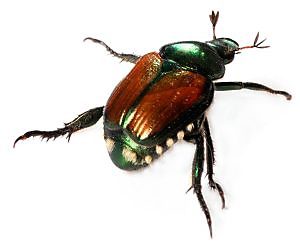 Eradicating them has proven difficult since they live underground as grubs and are only active a short time in the summer.

Is it Really a Japanese Beetle?

Regardless of how much damage they cause, it’s hard not to admire the appearance of Japanese beetles. Their head and thorax are covered in a metallic green shell and their wing coverings – technically called elytra – are a shimmering copper color. Taken together, it’s a striking design courtesy of Mother Nature.

Like all beetles, Japanese beetles have six legs, two antennae and wings. They’re clumsy flyers, often bonking into objects as they travel. Toward their back-end, Japanese beetles sport six tufts of white hair on each side of their body. These tufts are often key to identifying them when comparing them to beetles of similar coloration.

From Japan to the U.S. and Beyond

It shouldn’t surprise you that Japanese beetles are originally from Japan. In their home range, these beetles are minor pests because they have a number of natural predators. Also, the Japanese climate helps to keep them in check.

The insects seem to have entered the U.S. in 1916, where they were stowaways aboard a shipment of irises. From that landing point on the Eastern Seaboard, they began to spread west and north – they are now found in Canada and through much of the U.S. east of the Rockies.

At the same time, these beetles also moved into several other countries, and have strong populations established in Portugal and western Russia. They are also believed to have spread into India and Korea and were recently found in Italy as well.

Scientists believe that their expansion is being facilitated by humans and their love for lush, green lawns that are frequently watered — perfect conditions for Japanese beetle larvae to thrive.

Japanese beetles are notorious for damaging a wide variety of plants in North America, including roses, vegetable crops, flowering plants and shrubs. They eat the foliage of these plants, always focusing on the tender plant material between the veins of the leaf. This feeding process, called skeletonization, leaves the plants decimated.

At last count, Japanese beetles were known to prey on more than 200 plants in North America. Here are just a few of the well-known plants that are susceptible to Japanese beetles:

Unfortunately, the damage wrought by Japanese beetles isn’t limited to their adult form. As grubs, these insects bury themselves under your lawn where they do their best to ruin your grass.

After hatching in late summer, the grubs dig into the soil – often up to a foot deep. At this point, they are relatively dormant and stay inactive until the spring. As temperatures warm, the grubs work their way toward the surface again where they feed on the tender roots of turf grasses. As a result of this extensive feeding, these underground feeding machines leave patches of dead grass. Their dining habits destroy roots and reduce the grass’s ability to take up water. This damage causes the grass to die off during hot and dry weather.

You can check to see if Japanese beetle grubs are the culprit to your lawn problems by digging up a damaged section of turf and looking for the curled, c-shaped grubs, which are about 1 inch long. If you find more than 10 per square foot, expect significant damage from these grubs.

There are two primary ways to control adult Japanese beetle populations. The first

, which is probably the easiest and least expensive, is to set up a non-toxic Japanese Beetle Trap near the afflicted foliage. These traps use a pheromone lure to attract male beetles, which interrupts the breeding cycle.

The second option is to use an insect-killing spray that attacks the insects without affecting the plant. Safer® Brand has two sprays available to control these pests. First is Safer® Brand End ALL® Insect Killer, an OMRI Listed® treatment that’s compliant for use in organic gardening. It allows you to use it up to the day of harvest. Also available is Safer® Brand BioNEEM® Insecticide and Repellent, an OMRI Listed® contact killer that doesn’t persist in the environment.

Other methods are also available, but they may require quite a bit more of a hands-on effort. 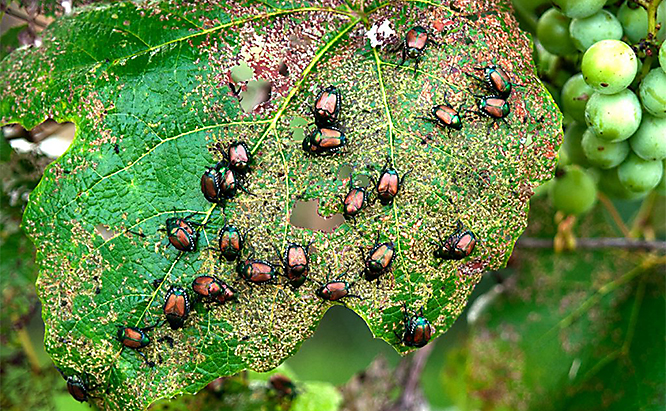 When feeding, Japanese beetles skeletonize foliage by eating all the green between the veins of a leaf. 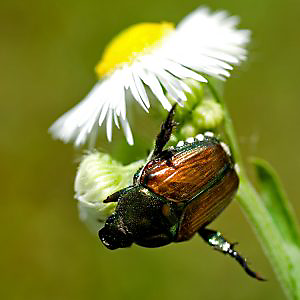 Are you in a battle with Japanese beetles in your lawn or garden? Let us know if you have any questions by reaching out to us when you visit Safer® Brand on Facebook. You’ll be joining a community dedicated to organic gardening!